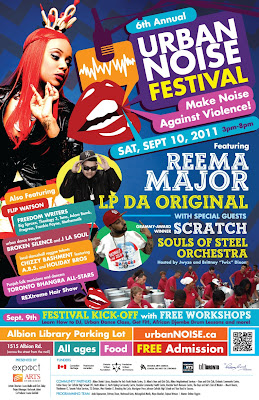 all-ages urban arts festival organized by young people in the Rexdale/Jamestown communities to inspire youth to stand up to violence.

The festival features a rich lineup of talent including Toronto steel pan masters Souls of Steel Orchestra, artists from Rexdale as well as a special guest performance by renowned, Grammy-winning beatboxer Scratch, from The Roots. urbanNOISE takes place Saturday, September 10 from 3pm - 8pm on the grounds of the Albion Library in the heart of Rexdale/Jamestown in North Etobicoke and is hosted by Jwyze (ex-Flow 93.5 FM host) and Brittney "Twix" Dixon.

• This two-day event kicks off the day before (Friday, September 9) with a series of free urban arts workshops for youth in the area, inside the Albion Library from 5pm - 8pm.

A joint production of Expect Theatre (who recently created the highly acclaimed AWAKE for the Toronto Fringe Theatre Festival honouring those lost to gun violence) and Arts Etobicoke, urbanNOISE provides free arts-based workshops as well as part-time employment and mentorship through its Ambassador Program to youth in North Etobicoke while fighting the popular perception of Rexdale as a gang war zone.

This year, the artistic element of urbanNOISE is being organized by a group of youth from the area mentored by community arts educator Dalton Higgins.

urbanNOISE helps foster up-and-coming talent in Canada's urban music industry. Since some of Canada's hottest urban music stars have played the festival before making it big - such as Drake and Jully Black - the future of Canadian hip hop just may be found on stage at this years urbanNoise! The roster of talented performers joining the headliners features a multicultural line-up of artists, dancers, poets, 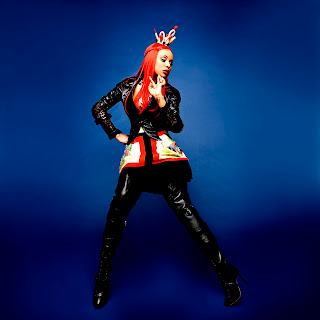 Reema Major is one of Canada's fastest rising rap talents. Her early claims to fame include being invited to participate in the 2010 BET Hip Hop Awards cipher and being signed to a joint venture with Universal Music Canada and Interscope Records (USA) in 2010. She recently released her third mixtape, I Am Legend.

Souls of Steel Orchestra is a leading 20-piece steel pan performance group in Toronto under the leadership and tutelage of Andre Rouse. Their performances are fused with traditional instruments (trumpet and piano, for example) and vocalists for a truly original musical experience. Their scores are diverse and range from jazz to contemporary to classical and to dance.

Considered one of the best vocal percussionists in the world, U.S.-based Scratch is a member of legendary, Grammy-winning hip hop group The Roots. His newest album features a variety of acclaimed rap musicians, including Kanye West and Talib Kweli.

In the lead up to the festival, youth from the area will create a large graffiti mural titled "R.I.P: Six Degrees of Separation" to pay homage to the lives lost to violence and to drive home the message that all 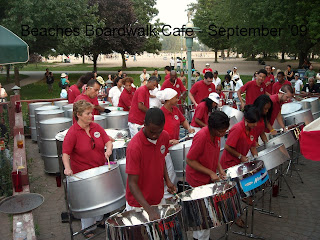 Torontonians are affected when a young person is killed. The mural will display the names of Rexdale residents that have died from violence, and community members will be invited to add names to it at the festival.

In addition to music, the festival features a number of activities including the first-ever REXtreme Hair Show by Sebert Exclusives; workshops in Graffiti Arts, African Drumming, DJ'ing and Fitness; plus games, contests, prizes, face painting, food and much more.

There is also a Somalia & Horn of Africa Famine Relief artistic speak-out and fundraising drive co-produced with the Somali Youth Association of Toronto, as well as handing out of the urbanNOISE Award commemorating the work of an outstanding individual in the community.

urbanNOISE, an initiative of Expect Theatre and Arts Etobicoke, is funded by: The Ontario Trillium Foundation, Canadian Heritage, Ontario Arts Council, Toronto Arts Council, the City of Toronto and 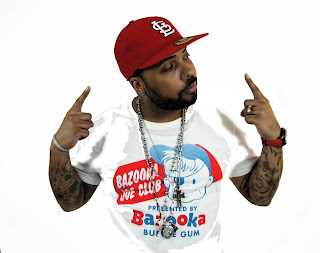