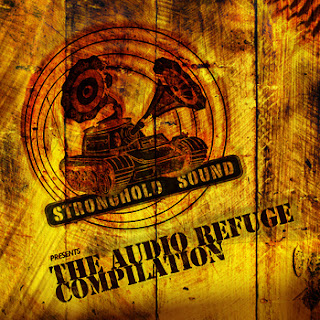 Encompassing a wide variety of sounds including traditional African and Arab folk, reggae and dub-step, hip-hop and new cumbia, the SF-based Stronghold Sound presents its first in a line of releases, The Audio Refuge Compilation. Each track is both experiment and firm step in a direction that this group of global artists is putting forth to lovers of tradition and the dance floor.

Among the tracks on the release are a handful featuring the talented Alpha Oumar 'Bongo' Sidibe [Guinea] and his blend of Manding Roots and Afrobeat rhythms played by the solid Wontanara Revolution group. Gnawa Kronik [Tim A. Fuson, Ahmed Khouja] puts forth a couple tracks exploring the Saharan musical tradition along side renowned musician and imaam, Yassir Chadly [Morocco]. North-African groove band, The Dunes, gets a horn remix courtesy of dub Snakkr [Syria], who also puts forward a few grimey audio treats of his own including a couple featuring the lyrical skills of Iggy Mon [Trinidad].

Well known Bay Area dj/producer, Juan Data [Argentina], gets a debut of his new project, Bondi Blaster, which includes some bass heavy cumbia numbers featuring salivating vocals by the lovely Tami [Argentina] as well as tight rhymes by emcees Nes [Mexico] and Ephniko [Colombia]. Other unique tunes include an oud-funk number featuring the multi-talented Excentrik [Palestine], as well as a mellow and sweet soul inspired tune by Iamani I Ameni. To top things off is a stellar lyrical performance by Gift of Gab [Blackalicious] as he's backed up by a fresh blend of beats, Ngoni strings, organ and sensuous vocals produced by dub Snakkr.

Working with Gnawa, Cumbia, Oud, Rap, Reggae and Afrobeat, the compilation gives a road map to where this eclectic label plans on taking us.