on September 11, 2011
From a media release - art for the survivors of 9 11 displayed in public for the first time:

(Toronto)  The original pen and ink drawings that resulted in the book Healing Hearts, authored in 2002 by Toronto artist John Coburn, will be shown publicly for the first time, in Manhattan from September

Coburn, who has published four books related to New York City, “…..joined the pilgrimage to lower Manhattan in the fall of 2001. Some brought candles. Some brought love notes, poems, flowers and photos. John brought his sketch pad."- Foreword from Healing Hearts, by Bryan Chadwick.

The result was a sensitive, calming and remarkably human story that reflects the compassion of New Yorkers and people from around the world. Coburn's drawings will leave a dramatic and positive impression on the viewer a decade after September 11th.

To honour and pay tribute to the families, first responders, and recovery workers, Coburn has accepted an invitation from Joseph Mizzi, President of Sciame Construction to display the original drawings during a free public Exhibition from September 1st through 15th.

“Sciame Construction is pleased and honored to display John Coburn’s inspiring drawings at our 14 Wall Street offices and to participate in this chapter of the Healing Hearts story on the 10th anniversary of the September 11th tragedy.” – Frank Sciame and Joseph Mizzi, Sciame Construction Co. 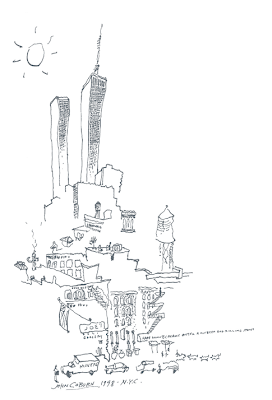 A copy of Healing Hearts (only 3,000 were produced nine years ago as a gift to the families) will also be on display at Coburn’s exhibition.

The original drawings, most of which were damaged by a major fire at Coburn's studio in 2006, provide a personal snapshot of life in New York City in the fall of 2001. Of the several hundred drawings and paintings lost in Coburn’s studio fire, the only items recovered were the original drawings from Healing Hearts.

In addition, a feature-length documentary film – Healing Hearts - directed by Paul Perrier is currently in the works. The film will tell many of the extraordinary stories illustrated in the book through poignant and engaging interviews.

The Healing Hearts Project, including the Art Exhibition, curated by Beckett Fine Art, has been generously supported by Fairfax Financial Holdings Limited, a financial services holding company based in Toronto.

The mission of the Healing Hearts Project is to provide a touchstone for enduring remembrance and healing through the drawings of John Coburn. The next planned phase of the Project is a documentary film with an education initiative to follow.
art about 9 11 in new york city documentary film pen and ink drawings public art exhibit toronto artist