TORONTO - 1933. French police find Madame Lancelin and her daughter face down, in their living room, mutilated. Upstairs, two maids are found naked, huddled together in one of two single beds. Their motive: 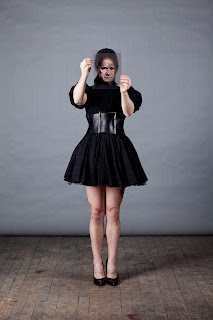 self-defense against an abusive mistress. This true story was the inspiration for queer iconoclast Jean Genet’s masterpiece. A powerful statement against servitude, this psychosexual thriller is brought to you by the creative team behind last season’s acclaimed production of Sarah Kane’s Blasted.

Buddies’ is thrilled to kick off its 2011/12 with a celebrated work from the queer canon. Artistic Director Brendan Healy helms a fearless interpretation of Jean Genet’s The Maids, in a translation by renowned UK playwright Martin Crimp. Featuring a trio of seasoned Stratford veterans – Diane D’Aquila, Ron Kennell and Maria Ricossa – this queer reclaiming of Genet’s masterpiece will boldly delve into the play’s abject sexuality and its ruthless position against social subjection. The production marks the first time Genet's work has been performed in this building since Lindsay Kemp's seminal 1978 production of Flowers, A Pantomime for Jean Genet, which was based his novel Our Lady of the Flowers.

Jean Genet’s body of work reads like a queer manifesto through its exaltation of sex, deviance and the destruction of power. The Maids is a brutal excavation of the sickness that class structures create in the human psyche. In the play, two maids – Solange and Claire (D’Aquila and Kennell) – ritually enact a sadomasochistic fantasy of dominance and submission. Unable to imagine a destiny other than a life of servitude the line between reality and fantasy progressively gets blurred for the maids, and the ritual inevitably ends in violence.

In casting Ron Kennell as one of the maids, Healy is true to Genet’s original intent to have men play the roles. Kennell and D’Aquila are eerily genderless and strangely comedic whereas Ricossa, in the role of Madame, brings a stately sexuality to the production. In Healy’s staging of The Maids, criminality is eroticized as class structures, gender roles and social norms are occupied and subverted by the two maids. With this production, Buddies re-situates gender and class rebellion at the heart the contemporary queer aesthetic and politic.

Healy reunites the stellar design team behind last season’s award-winning production of Blasted, which swept the Dora Awards with 5 wins for Outstanding Set Design, Lighting Design, Sound Design, Production and Direction. The production design, along with the biting humour and blunt language of Martin Crimp’s translation, create a visceral frame for Genet’s masterpiece.

Buddies is thrilled to open its 2011/12 Season with this powerful play, after a record-breaking year. 2010/11 saw a 30% increase in overall attendance, several sold-out runs and two hit touring productions.

Seating for The Maids is limited. Tickets and Passes are now on sale at the Buddies Box Office.