CD Release: The Afro-Semitic Experience and Further Definitions of the Days of Awe

The Afro-Semitic Experience released a new High Holy Days Holiday Album earlier in September and has two concert dates coming up in NYC December and in January.  Show details are below: 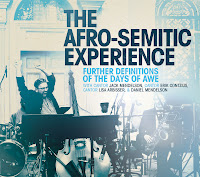 High Holy Revival:
The Afro-Semitic Experience Gets Age-Old Prayers Dancing in the Aisles on Further Definitions of the Days of Awe (Reckless DC Music)

For The Afro-Semitic Experience, there is dancing before the temple of sound. The kings and queens of the Cotton Club trade eights with the rock stars of cantorial music's golden age. Booker T and the MGs and 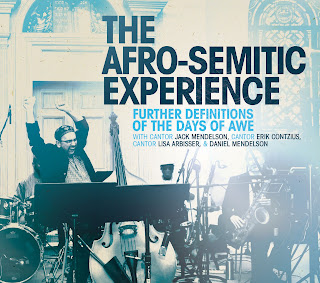 Joined by the last of the old-school cantors, Jack Mendelson, the group lays down Further Definitions of the Days of Awe (Reckless DC Music; September 13, 2011), live explorations of cantorial music, jazz, Latin vibes, Afrobeat and soul. Innovative technique and rock-solid roots get feet tapping and spirits soaring. Just in time for the High Holy Days, the (Jewish) New Year and Yom Kippur, the album presents a positive, cross-cultural reimagination of repentance and catharsis.

Creating new settings for the midnight prayers of Selichot, the service that marks the beginning of the most holy time of the Jewish liturgical year, The Afro-Semitic Experience returns worship to its creative, vigorous roots. It celebrates the intersection of gospel spirit and the passion of hazzanut (an ancient Jewish style of cantorial singing). It finds powerful new points of contact with the divine.

"Prayer and study are a major tenet of all three Abrahamic faiths. That's great, but to get there, worshippers often got rid of cathartic experience," reflects group founder, bassist and composer David Chevan. "But we need the dancing at the temple, those ecstatic moments. That's really where we're coming from."

For a musician like Chevan and group co-founder, composer, and keyboard wizard Warren Byrd, the links 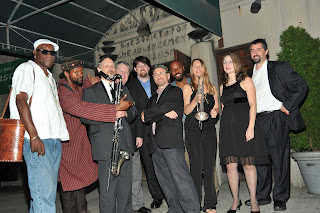 were clear between the most sacred of religious moments in cantorial masterpieces on old 78s and sounds of jazz, soul, and gospel. Listening to Mendelson, who grew up singing with some of hazzanut's greats, Chevan felt the same contours and dynamics that he experienced as a seasoned jazz performer and as an occasional bassist in several of Brooklyn's African-American churches.

"I was curious how I would accompany this music if I ever got a chance," Chevan recalls. "I realized that The Afro-Semitic Experience could do it really wonderfully. We could color the settings the right way and make them interesting, while still bringing out the spiritual qualities."

The group finds the sway of tango in a stately Selichot prayer ("Adoshem, Part I") and Otis Redding-style soul in their setting of "Viddui", a prayer that is an acrostic list of sins worshipers chant to seek atonement High-energy Latin beats ("Adoshem, Part 2") transform fervent prayers, while slow-burning congas ("Shomer Israel") and atmospheric trumpet and bowed bass ("Tivieynu") perfectly support the deep expressiveness of cantorial music.

This moment-where poignant emotion and sonic prowess intertwine-unites Jewish and African American musical tradition. "I'd spent plenty of time as a child and adolescent in the presence of the ululations of highpraise in churches, seeing my sister, or my neighbor's son or daughter "slain in the spirit" or speaking in tongues accompanied by Hammond organ, piano, drums, and clapping hands," Byrd recounts. "The melismata of hazzanut is virtually congruent to the trills and swoops of gospel singing. Our group's improvisational directive is as free as playing impromptu accompaniment for spontaneous songsters at the S 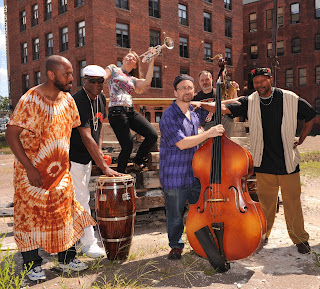 The group's mix of spirit, complexity, and spontaneity impressed Cantor Jack Mendelson, who heard the group's interpretation of several vintage cantorial performances. He began meeting with Chevan, singing him lines he had learned and honed over decades of training, davening, and teaching others-including his filmmaker son Daniel, who sings with him on several tracks.

Steeped in the improvisatorial savoir faire of cantorial tradition, Mendelson loved getting a chance to connect his art with jazz. "I can go crazy as long as I stay in the mode. You have to practice and have a good ear, like a jazz musician," Mendelson explains. "I ask all of my cantorial students to listen to Ella Fitzgerald. When she sings a song, she sings around the song. It's never the same thing twice...which is what a great cantor does."

In a small circle or a big house of worship-turned-dance-floor, The Afro-Semitic Experience brings people to this joy. "At a benefit show several years ago in a chapel at Yale, we got into a groove and all of a sudden, the other performers jumped up and started dancing together," Chevan recalls. "There we were, in a church, with everyone dancing, looking at each other, and thinking wow. It's all making sense."

The commitment to group music making has turned the group's message of cross-cultural connection into a big, dancing reality. "The best moments often come with audiences from different communities. We get to watch people getting into the moment, touched by what we're doing," reflects Chevan. "It's amazing when communities do come together, and you see them listen to each other's songs and start to dance, side by side."

"In this music, there really is no room for narcissism," Byrd muses. "The tuning in to my fellow musicians and the audience trumps any self-centeredness."