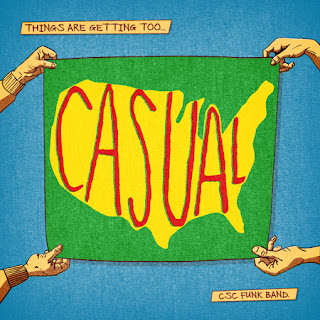 Brooklyn, New York - With the Summer release of their debut album Things Are Getting Too Casual, CSC Funk Band charges 11-deep from the formidable Brooklyn underground to forge an unforgettable path that leaves no ass unshaken. This is funk in the sense of both sound and scent, funk in the sense of blistering backbeats and sweaty, selfless abandon, funk in the sense of all senses colliding and all minds melding to form one holy motion. This is instrumental get-up-and-dance music from planet nowhere. CSC Funk Band first collided in atomic style at a Brooklyn loft party where the event organizer’s only instruction was “make it fun and make it funky!” Thus, what began as a just-for-kicks improvisation amongst friends quickly became a “what’d I miss?” sensation at Brooklyn’s sweatiest stages.

Spearheaded by Colin Langenus, the lead guitarist for prog-punk pioneers USA Is A Monster, CSC Funk Band celebrated its initial success by expanding the lineup to include players plucked from each point of the stylistic spectrum. Although initially concentrating on dancefloor-friendly funk jams, the embryonic group quickly grew out of its party-band britches by absorbing the diverse influence of its new members, including a former GWAR drummer, a keyboardist who plays with the Akron Family, an Anthony Braxton collaborator, and a trombonist for ska legends Bad Manners. 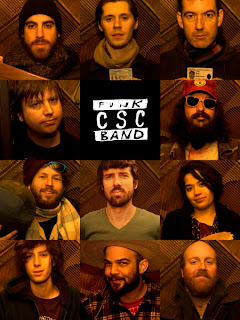 Rocking saxes, moog, guitars, trombones, drums, trumpets, a bass, and an oboe, the band is a random, diverse, and eclectic collective whose members draw from their rich histories to effortlessly entertain every flight of fancy while never once stepping out of sync or into categories.  The psychedelic avalanche that the band effortlessly induces can be traced up the musical mountain to firm roots in technical mastery, avant-experimentation, and noise-punk ethos.

About the video: "We Don't Care"
Here we have CSC Funk Band’s trippy, tubular new video for their Fat Beats Records debut. With footage by animation queen B.A. Miale, this piece features lead and supporting roles from The Beautiful Dancer, Astronaut Man, Fun Yellow Alien, The Break Dance Crew, Smile Puppet, and last but not least, THE PINK OUTLINED GORILLA. This hot cut off their Things Are Getting Too Casual was recorded with Tony Miamone at his epic Williamsburg Studio G, which has a beautiful view of Kellogg’s Diner. Be prepared to see the world in real time through CSC’s eyes – that is, midway on an acid trip walking down McGuinness Blvd. at 3AM on a summer night looking for empanadas and dance music. The song is called We Don’t Care…and neither should you.