Elisabetta Fantone at the Thompson Landry Gallery Toronto - to Sept 18

• Her show continues at Toronto's Thompson Landry Gallery until September 18, 2011

TORONTO - Italian-Canadian actor, artist and author Elisabetta Fantone is taking North America by storm, and it’s not just due to her stunning beauty, which has helped propel her to international recognition. She is not only a talented actor (she will next be appearing in the indie film “My Name is Sandy”, premiering in New York this fall), but she is a gifted painter as well, and most recently was asked to showcase her work in the Kardashian’s famed clothing boutique ‘DASH’.

Currently, Elisabetta is gearing up for exclusive representation of her exciting artwork across Canada. First up, her work will be displayed at the Kurbatoff Gallery in Vancouver, and will feature her paintings of Mick Ja 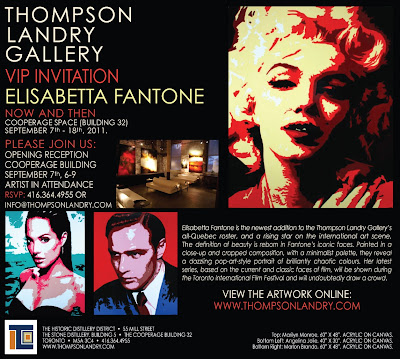 gger, Marilyn Monroe, Wayne Gretzky and Celine Dion (which happens to be the same painting she made for Celine Dion herself, but in a different colour).

Up next, Elisabetta will be represented by The Thompson Landry Gallery, which will showcase twelve of the talent’s original works in her show titled “Now and Then”. Her introduction at the gallery and art show takes place on September 7th, just days before TIFF madness takes over the city. The show will consist of eight huge pieces that pay homage to classic icons, including Marilyn Monroe, Brigitte Bardot, Bob Dylan and Marlon Brando. The four remaining medium pieces will represent some of today’s top stars (even some you may spot at the 2011 film festival!).

As if these two huge shows aren’t enough for the busy performer/artist, she also have a show scheduled at Miami’s Myra Galleries in the Wynwood district in October, and a show in her former hometown of Montreal at the Soho Gallery in Old Montreal in November.

Her artistic work isn’t the only aspect of her career on the rise. The vivacious actor is starring the highly anticipated Indie feature length drama ‘My Name is Sandy’, which examines the world of prostitution. Elisabetta takes on the brutally emotional and physical role of an illegal immigrant and high-end prostitute from France named Sandy. The story recounts Sandy’s dark new life on the streets of New York City. After working Manhattan’s streets for three years she is asked by a client if he can document her for a report he’s doing on sex-workers. The tale chronicles a young woman’s descent into, and experiences in the world of prostitution. The stories are heard and seen through the eyes of her latest client, Francis. Written and directed by Montreal native Marco Iammatteo and distributed by Times Square Films, the film is set to premiere in New York this fall.

This multi talented beauty has been busy with acting roles since she was discovered in 2006 when she won over the hearts of French speaking Canadians thanks to the insatiably popular docu-reality TV series ‘Loft Story’, of which she quickly shone as the break out star. Since then, Elisabetta has accomplished numerous artistic endeavors, including film and television, modeling, music, painting and literature. She has already released her first book entitled "Journal intime d'une Lofteuse". Just a few short years later, she had added celebrated pop-art painter and chart-topping vocalist as additions to her already impressive repertoire.

Elisabetta’s acting career includes roles in major network projects such as NBCs ‘Secrets of the Mountain’, her recent role as a college co-ed on Spike TVs ‘Blue Mountain State’, and the short action drama ‘Daisy’ in which Elisabetta plays the lead role of Daisy.

In 2006, as her acting career reached new heights, presenting countless opportunity and international acclaim, Elisabetta enthralled her fans by unveiling yet another tremendous talent. On November 26th of 2006, the starlette debuted her ‘Various Faces’ acrylic pop art collection with an epic launch event in Old Montreal, attended by celebrities, art enthusiasts, fellow actors and friends. Elisabetta's first painting was sold for $8000 on eBay during her time on Loft Story. Elisabetta gave all the proceeds of the painting to the MIRA Foundation.

Elisabetta decided that she would marry her two passions of painting and performing, and head to the U.S. to further both talents. She has since expanded her effervescent compilation of abstract and pop artwork with new tribute series ‘Blonde Icons’ and, most recently, her ‘Iconic Brunettes’, along with a string of commissioned pieces in both the high-end commercial and retail markets, including international celebrities such as the Kardashian Sisters as well as E! Network. The exclusive commissioned portrait of the three Kardashian sisters painted in 2010 now hangs in their DASH boutique in Miami, Florida. Elisabetta’s other paintings are exposed in Miami’s prestigious Design District.

Born in Montreal to Italian parents, Elisabetta grew up with her three older brothers and made the move to Italy at the age of four where she caught the acting bug. The family returned to Montreal when she was 8 and by the time Elisabetta was in high school, the natural-born star was quickly greeted with the prestigious award of Best Performance for her command of the stage in her role as Lucretia in Michael Tremblays, ‘La Mandragore’. Swiftly earning the respect and support of the Canadian acting community, Elisabetta was affirmed in her path to follow her dream and secure her place in the spotlight. In honing her craft, the actress sought out all avenues as they related to theatrical arts, the mastering of which would later prove crucial in her evolution into the true professional talent that she is today.  Between dance lessons, singing practice, conquering three languages, French, Italian and English, Elisabetta never allowed herself to abandon her academic education.  Between classes and performances, the budding artisan forged onward through her college career enhancing her knowledge of the arts and obtaining a degree in Interior Design from LaSalle College in Montreal.

Elisabetta, a true animal lover, now lives in Miami with her two small dogs, a Chihuahua named ‘Dolce’ and a Mini-Pin named ‘Topolina’. When not gracing the covers of magazines around the globe, doing TV interviews, or working, Elisabetta enjoys reading, working out, playing 80’s video games and baking. She is also passionate about charity and has been associated with Breast Cancer and Aids charities as well as The Children’s Foundation in Montreal. Elisabetta continues to volunteer her time hosting events, doing commercials and auctioning her paintings to raise awareness and money for charity.