Projections and poetry, history, dance and music fid common ground in Fleurette Africaine, a production-in-progress I caught last night (September 17). The Wind in the Leaves Collective is a multi-disciplinary group and Saturday night the performed a piece that's been three years in the making, weaving together their arts in a kind of poetic story cycle. Writer Charles C. Smith's voice and his poetry is the constant thread in a series of scenes or segments that involve dancers, a guitarist and the projected images of visual artists and a photographer in various combinations.

Charles' poetry is dense and weighty, full of both imagery and import. Clutching curbstones against the weight of despair... the dancers pair with one another and then spin off on their own; at one point a dancer grabs the papers from his hands. The multi disciplines represented weave in and out of each other during the course of the performance, at times in synch and at others more complementary than literal in their interpretation. The personal and historical narratives are linked thematically by the experience of the African in North America, from slavery in 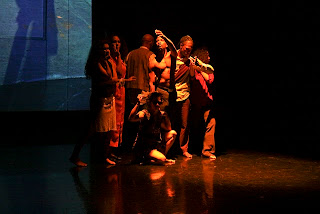 The recorded music is jazzy and often dissonant, guitarist Harvey Weisfeld's live performance insistently melodic while intricate and bluesy. The segments flow into each other, sometimes with a brief pause, and the variety and talent of the performers is what brings the various stories to life. Some are personal, and of these the two stand out scenes involves memories of father and mother. After his father dies, he speaks of he and his mother as ...the two remaining edges of our strange trinity... These scenes achieve a real poignancy. 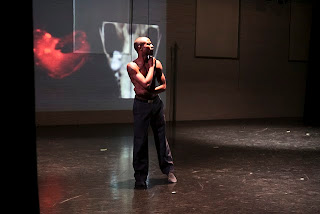 Both the music and the dancers provide the emotional thread and drama of the stories, and here the latter display an expressive gift and a high standard. Co-choreographer Olga Barrios was striking in a variety of roles. I'd already seen her dramatic choreography in Aluna Theatre's Nohayquiensepa earlier this year. Kevin Ormsby (the other Co-Choreographer) has a compelling stage presence that holds your attention even when he's standing still, and a developed sense of theatricality that made it look effortless.

It's described as a work in progress so I might expect some trimming and tweaking to take place here and there as it solidifies, but it's a watchable and interesting project.