The Opera Electric:
Vagabond Opera Brings High Drama Cabaret-Close on Sing For Your Lives! and on Tour, September and October 2011
Check all the dates at this link 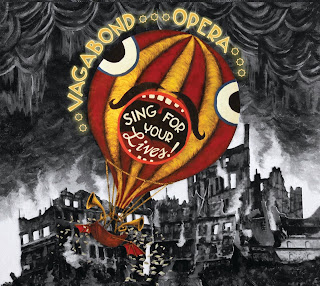 It’s a dark and stormy night. The cabaret swirls smoke, euphoria, danger. A burlesque beauty sings a swooping, eerie song and suddenly sprouts a full beard. An itinerant tenor and a melancholic balloonist croon to apocalyptic waltzers. The drums ba-da-boom, the cellos duel, the gitarrón’s been drinking.

Like surrealist Marcel Duchamp packing an entire life’s work into a suitcase, the Portland, Oregon troupe tucks the high drama of opera into the tight squeeze of the sexy cabaret. By turns sinister and seedy, sweet and nostalgic, the brainy, sultry band mashes up Eastern European folk theater and classical grandeur, hot club act and avant-garde klezmer jams, perky musicals and edgy absurdism. 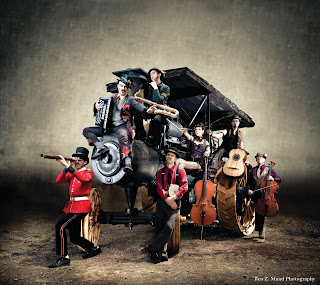 “We love storytelling, creating a world on stage or on a recording,” says saxophonist and songwriter Robin Jackson. “We bring people into a dark cabaret where they forget themselves.” “We draw on Old World elements and genres,” adds Eric Stern, Vagabond Opera founder, composer, and singer, “but we utterly transform them.”

The band take the polychrome pleasures of their musical, theatrical storytelling on the road in September and October, including performances in Berkeley, Chicago, Seattle, St. Louis, and Vancouver.