Hollywoodland: An Interactive Pop Up Art Event and Sale in Toronto Last Night


Hollywoodland
an Interactive Pop Up Art Event and Sale
August 31, 2011 in Toronto

It was invitations only dahlings, as we the beautiful people gathered at the expansive lakeside digs of Corus Entertainment last night for Hollywoodland, art show as arts event. It was an interesting idea and an 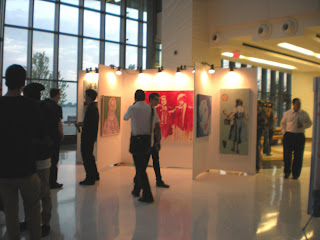 appropriate theme for both the crowd and the venue.

On display were suitably themed works of art and on offer was Steamwhistle (the beer that makes it to every party in Toronto,) wine, and all the candy, popcorn, chips (baked for the health conscious) and hotdogs (for the willfully blind) one could stuff down one's gob.

Kelly Grace's multimedia works of people watching the movies in 3D glasses. It's a cool take on the portrait, complete with green wash (aka green screen?) backgrounds and popcorn. Couples huddle together in Big Scary Movie, in another piece, one scratches his nose absentmindedly. A second series offers images from The Wizard of Oz with the same green wash background.

Archival prints from American photographer David Lachapelle, including a tryptich of Drew Barrymore first cutting, then demolishing a wedding cake in veil and wedding lingerie. Pricy but definitely attention getting. 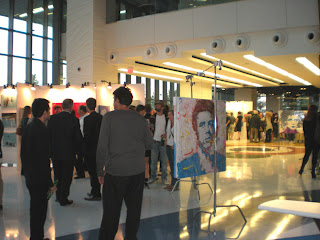 I really liked Viktor Mitic's series of celeb painting - the canvases riddled with bulletholes. It seems an apt visual commentary on the dark side of our fame obsessed culture. He uses a kind of surreal approach that's true to form with a psychadelic palette. My favourite was his dark portrait of Quentin Tarantino.

Along the same lines was Andrew Briggs' drippy paintings of movie characters, including Eddie (Edward Scissorhands), the iconic duo of Samuel Jackson and John Travolta from Pulp Fiction and the like. He uses fat brush swishes of colour and then overlays it with kinetic lines that create movement and tension.

Traz' green ink on paper works are Boschian in their intricacy and debauched subject matter. In "Bonerland Things That Bounce" female figures are stuffed in every orifice (with a preference for the one in behind) and disembodied penises abound. 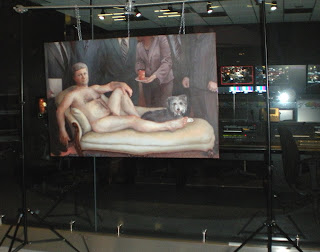 Undoubtedly the most horrifying was Margaret Sutherland's Emperor Haute Couture - a riff on one of those paintings everyone studies in art school (Edouard Manet's Olympia) featuring none other than our PM Stephen Harper himself nude as the day he was born on a chaise lounge with a dog and an aide offering Tim Hortons. Imagine having that on your living room wall...

There was a video pastiche of the pretty party people, live bands and more, and while I don't have any idea of sales, I did overhear that some of the showier pieces were being snapped up. Perhaps the art show as artsy event is something we'll see more of.