SEX, RELIGION & OTHER HANG-UPS:  JAMES GANGL REMOUNTS HIS SMASH HIT FRINGE SHOW SO HE CAN FIND A GIRLFRIEND… seriously. 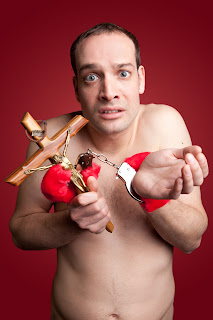 • Gangl self-finances a 3-Week run of his show October 3 to 22, 2011 to increase the odds of finding true love.  Chris Gibbs directs as Gangl leaves his heart on Theatre Passe Muraille’s Mainspace stage!

[Toronto, ON] –  Sex, Religion & Other Hang-ups, is about a guy with a ravenous sexual libido (Gangl) battling it out against a guy with a staunch Catholic upbringing (also Gangl) over the heart of a sexy, insightful underwear model (not Gangl) that he meets at his first professional acting gig, a commercial shoot for Coors Light.

Gangl tells the story in the hopes that the right lady will date him after the show.  Fringe sensation and solo-show veteran, Chris Gibbs directs, mining the universal truths in Gangl's twisted and touching true story.

Entrepreneurship for highest percentage of tickets sold… the entire run was sold-out!  Gangl is a decorated improviser nominated for 3 Canadian Comedy Awards including Best Male Improviser and is co-creator of the smash indie film night My Tapes.

Gibbs has directed himself in a number of Fringe hits including Like Father, Like Son? Sorry, Antoine Feval and Gibberish.  Gibbs won a Canadian Comedy Award along with The Carnegie Hall Show for Best Improv Troupe and has been called "One of the funniest guys around" by the National Post.  Gibbs thinks that Gangl is another one of those funny guys... just not as funny as him.