NEW YORK CITY - Join Stew, Heidi Rodewald and Jon Spurney for the grand re-opening of Joe’s Pub as they take a journey back in time to re-visit the songs of Passing 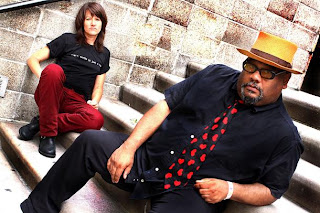 Strange, the theater production that went on to become both a Spike Lee-directed movie and Tony Award winner for “Best Book of a Musical.”  This intimate, acoustic set will explore songs from this hit show as well as songs that were cut from the show and songs never before heard on a New York stage.

With a gift for hook-filled melodies, taut poetic narratives, incisive song portraits and a sardonic sense of humor, the brilliant Stew and Heidi Rodewald are among New York’s preeminent singer-songwriters. The New York Times raves "A witty wordsmith, composer and performer, Stew can also play a mean guitar, and when necessary, he strides the stage like an evangelical preacher, or a preening rocker, to whip the audience into a froth."