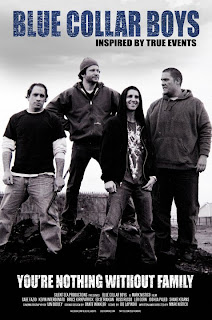 The TO Indie Film Fest continues to September 18

Blue Collar Boys has a black and white, gritty and unadorned feel well suited to its subject matter. The story begins somewhere near (actually just before...) the end, with the rough and tumble arrest of "Red" Redken, after an incident of assault at a construction office, and then backs up nine months or so to fill in the details.

Red, his family and brothers-in-arms fellow workers live in a working class world unembellished by the fanciful philosophies of Hollywood - you know, about the nobility of the blue collar world. This version is brutal and very non-PC - racist, sexist, full of young jerks behaving badly. The lot of them routinely get into bar fights and assorted mayhem, and one acts as the suburban drug dealer. Red and his best friend lie at the heart of the story, Red the (sometimes at any rate) cooler head to the other's shenanigans. Red's father is an architect and owns a construction business.

The bar fights are symbolic of a kind of general level of friction and conflict that's present in several layers of the story - friction between father and business owner and his wealthy clients, friction between husband and wife, between the big bosses with the contracts for housing developments. Everyone's tight where money is concerned. Dad's getting shit on because of claims of poor workmanship, the big boss not coming through 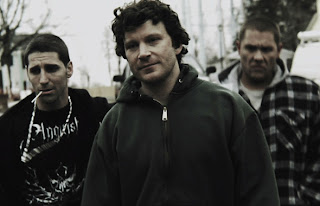 with his payments. Mr. Redken Sr. needs hand surgery, but the insurance company won't pay for it. It's the kind of paycheque to paycheque tension a lot of us can identify with. One day Red loses it and roughs up one of the contractors, and the downward spiral begins in earnest.

There's a nice sense of detail in the telling of the story and depiction of their world. They live in a bland suburbia as a kind of working man's dream, with dreary outlines that underscore the emotion of the story. A couple of the guys are pulling a driveway scam for extra cash, and a politician campaigns through the neighbourhood with a phony "I'm for the working man" schtick while a blues/rock soundtrack punctuates the action.

The one criticism I'd mention is a certain flatness to the emotional landscape. There are no good times in this suburban enclave, no smiles or laughs. The unalleviated greyness of tone leaves it nowhere to go - although that same flatness and matter of fact feel does suit its purposes at the end. You're expecting drama, an operatic kind of release, but then reality kicks in. (It's based on a true story.)

"I always wanted hands like my dad - but you can only make so much money with your hands," says the voiceover at the end. This is a film about the demise of the working class, both literally and figuratively.