Sidi Touré is a singer-songwriter from Mali who has garnered global acclaim for thought provoking songs that honor African sonic traditions in a manner that appeals to listeners from any continent. Throughout his time making music, Sidiâ€™s sound has both captured and challenged his roots. His music moves from the translucent swaying 'Takamba' to the trance inducing 'Holley', while the lyrics often address many non-traditional issues. Sidi has a critical mind and his songs have a purpose. His just-released album, Sahel Folk a SPIN Magazine pick, features spontaneously recorded duets with other Malian musicians.

I'm late posting about the festival (even though I was at the opening party on Thursday night - priorities! LOL Parties before posting!) but there's still much more to check out yet. 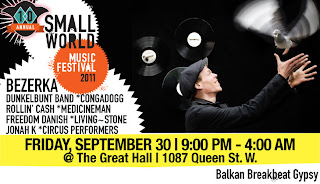 The tenth anniversary of Small World Music's signature annual program marks a milestone, both for the organization and for Toronto's world music community. Over the past decade, this passionate and dedicated organization has worked with thousands of people to weave the thread of world music through the fabric of the city.

As always, this year's Festival embraces the past and future of global sounds, showcasing new sounds infused with youthful energy and the spirit of cross-cultural collaboration that makes for a Brave New World of Music. The 10th anniversary festival edition truly has something for any world music lover's ears: legends of their genres such as Asha Bhosle and Shujaat Khan, Hilario Duran, and Canzoniere Grecanico Salentino; international rising stars including A Moving Sound, Sidi Touré, Lua­sa Maita and Dang Show, and electronic tastemakers and pioneers like Quantic, dunkelbunt, and El Hijo de la Cumbia. As always, Toronto and Canada are proudly and diversely represented by the likes of David Buchbinder's Andalusia to Toronto, Autorickshaw, Eccodek, Njacko Backo, Boogat, Drumhand, Prince Enoki's Insect Orchestra, The Lemon Bucket Orchestra, and Tich Maredza. 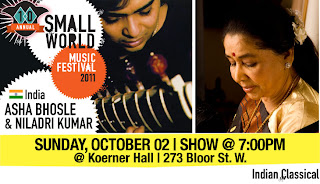