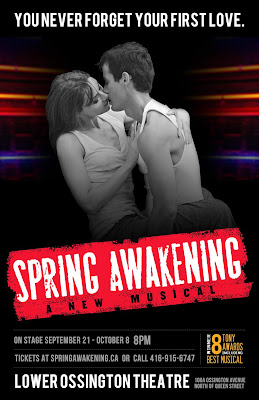 “Spring Awakening” is an 8-time Tony award-winning and Grammy award-winning rock-musical featuring music by Duncan Sheik and book and lyrics by Steven Sater. It is an adaptation of Frank Wedkind’s controversial 1891 German play, with the same name. Set in late-19th century Germany, “Spring Awakening”, is the story of adolescent sexuality and utter desperation resulting from a lack of control over youthful urges.


Banned for over a hundred years, you can't miss this exciting tale of first-time love!

Tickets Details:
• Price: $45/General Seating - $60/Premium Seating.
• Online: www.lowerossingtontheatre.com
• Telephone: 416.915.6747. Credit card only (Visa or Mastercard).
• In person: Cash or credit card at our box office. 100A Ossington Avenue, Toronto.
• All ticket sales are final; there are no refunds or exchanges.