The risk-taking writer/producer/director Veninger follows up her achingly sweet film-festival favourite MODRA with i am a good-person/i am a bad person – ironically enough, a film about a filmmaker on the 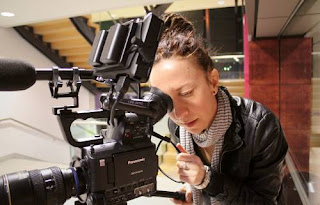 festival circuit with her daughter.

In i am a good-person/i am a bad person, Veninger plays struggling filmmaker/mother, Ruby White, with Switzer as Ruby’s daughter Sara - two women, each burning to make a major life decision without knowing where to start.

Well-intentioned but misguided filmmaker Ruby White, leaves her husband and son in Toronto and embarks overseas with her eighteen-year-old daughter Sara, as her assistant, to present her feature film HEAD SHOTS at festivals. Deaf to advice, a bundle of insecurities and a loose-wheel interviewee, Ruby over-shares, alienating all around her, Sara included. When a criticism from an audience member at a UK 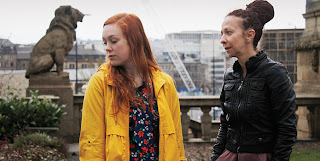 screening causes Ruby to question herself, the mother-daughter relationship melts down and Sara suggests they go their separate ways for the remainder of the trip.

Dejected, Ruby travels to the Berlin festival alone. During a break from trying to rustle up an audience for a screening, Ruby heads to her hotel bar where a drunk patron blurts to her “are you a good person or a bad person?”  Traumatized to self-reflection, she decides the next day to wear a sandwich board asking that pointed question, eliciting probing conversations.

Meanwhile Sara moves on to Paris to visit her cousin and struggles with the reality of being pregnant by a boyfriend back home. She wanders Paris faced with a hard personal choice, while falling in love with the City of Lights.

Both mother and daughter - now without each other as a sounding board - must confront their life changes alone, before returning home together.

“My daughter Hallie and I were traveling to film festivals in the UK and Europe”, says Ingrid, “and since our flights were already booked, it seemed logical to write a script that could incorporate our festival tour, and be shot over four days in Bradford, four days in Paris, and five days in Berlin. Despite all the risks in making this movie, I trusted the experience would be worthwhile, no matter what the result.”

“If this had been my first acting experience,” says Hallie, “I would have been totally overwhelmed. But because I had been through the experience of MODRA, I had a better idea of what to expect and I was actually more able to relax and enjoy the experience.” 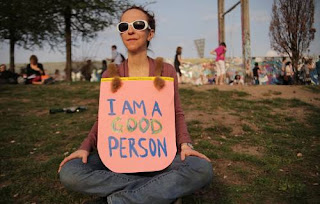 HALLIE SWITZER – Actor (Sara White)
Born in Toronto, Hallie graduated with honours from Rosedale Heights School for the Arts. As singer/songwriter, in 2007, she formed WEE GOLDEN. In 2008, she appeared on camera with a one-line role in ONLY (World Premiere, TIFF 2008). In 2009, she acted the co-lead role in the award-winning feature MODRA (World Premiere, TIFF 2010). “i am a good person / i am a bad person" is her second co-lead role in a feature film.