The party was Sunday night but still worth talking about because of the cause it announced. CubaFiesta! is a 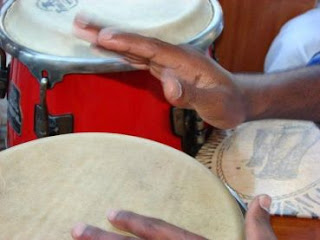 multi disciplinary arts festival that will take place in Cuba in December of 2012, organized by a few people centred in Toronto. So, amid the free drinks (I got the last mojito when they ran out of mint leaves! but don't worry there was still more rum) goodies to eat and hand rolled Cuban cigars, I managed to pick up the story of the event itself too.

Co-founder Mark Daniels says it all began with the music. "Because I'm a student of music..." he began. Mark is a student of fellow festival co-founder and Toronto based Cuban musician Joaquin Nunez Hidalgo

. After studying percussion for a time, they also became friends and discovered a mutual bent for philanthrophy. "We wanted to do something that takes our talents into reality," he says. They began to go to Cuba to play and ended up at a children's hospital where Mark was shocked at the lack of basic supplies. He asked the hospital for a laundry list of what they needed, and that's what the festival aims to accomplish - first, that is. Mark sees it as an ongoing effort that will branch out to help similar institutions. 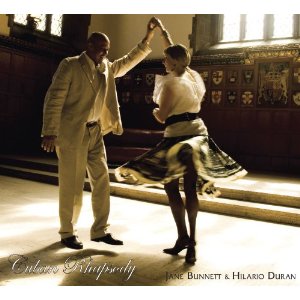 They've found a great location. "There's a natural amphitheatre that seats about 5,000," he reports. Hotels and other amenities round out the list of requirements, and the Cuban government has signed on to the festival, sealing the deal as far as the logistics and permissions. As for the acts, many have yet to be booked, but at the party we were treated to at least one of them in the duo of Hilario Duran and Jane Bunnett

Once they'd cooked up the basic idea, the questions started to follow. How to get Cubans from various parts of the country to attend? A chance meeting with CanWood Entertainment Inc. President Gordon Weiske provided the answer - set up screens across the country and bring the festival to them. The screens can then turn into film screens at night. "That's how it became a music and film festival," Gordon says. He's enthusiastic about the role of technology in bringing an event like this to a country without the kind of infrastructure North Americans take for granted. "You can go down there with a suitcase and a laptop and put on a show," he says.

Cuban born, New York City based filmmaker Roberto Monticello entered the picture via another chance meeting with Gordon Weiske. Roberto is one of the few US residents with permission to film in Cuba, which he has been doing for a number of years. He's been frustrated, however, in attempts to bring larger projects to the Caribbean nation. His American based friends and colleagues supported his efforts, but couldn't afford 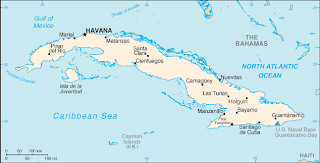 invoking the wrath of the State Department. He notes the irony of his situation - he swam to Guantanamo to escape, but now he goes back. His is a colourful history that includes recognition from UNICEF for his humanitarian work in Ethiopia during the famine, and he's been arrested and beaten in South America while pursuing Nazi war criminals. He'll be making a documentary about the inaugural festival.

It was an eclectic crowd and you could barely move by 9-ish. With food, drink, great music (including Joaquin's Rumba Iyabo and Cubano along with the Bunnett/Duran duet) and a festival with a cause, you could hardly ask for more.