Toronto's Theatre 20 Presents: Amelia The Girl Who Wants to Fly in Concert Oct 3

Theatre 20 presents MUSICALS THAT FLY:
Amelia: The Girl Who Wants to Fly in Concert
Monday, Oct. 3, 2011 8 p.m. at The Panasonic Theatre 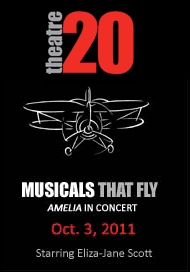 Concert Series at the Panasonic Theatre.

Starring Theatre 20 Founding Artist Eliza-Jane Scott, Amelia: The Girl Who Wants to Fly tells the story of the meteoric rise and mysterious disappearance of the legendary pioneering aviatrix Amelia Earhart who rose to unimaginable heights, both literally and figuratively.

In 1930s America, the celebrity machine of the day created an idol whose image resonates even now, more than 70 years after her death. Amelia Earhart... why did she want to fly? Where did she come from and how did she become the legend? Gray's examination of this infamous figure is part biography, part romance, part comedy and part musical. We get to join Amelia on the thrilling ride.