Visual Art in Toronto: David Trautrimas at the LE Gallery to October 2

Element and Interval
David Trautrimas at the LE Gallery Toronto
to October 2, 2011

TORONTO - Known for his pioneering photo-based technique of digitally fabricating man made structures, Trautrimas continues to elevate his practice with a series of digitally drawn images interpreting the 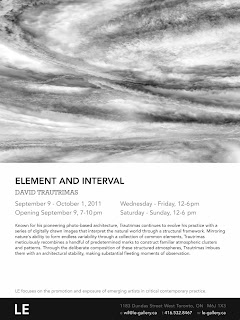 natural world through a structural framework.

Mirroring natures ability to form endless variability through a collection of common elements, Trautrimas meticulously recombines a handful of predetermined marks to construct familiar atmospheric clusters and patterns. Through the deliberate composition of these structured atmospheres Trautrimas imbues them with an architectural stability, making substantial fleeting moments of observation.

Trautrimas continues to experience success with his accomplished and sophisticated approach to utilize digital technologies in the fine art world. His work whas been recently featured in the Museum of Contemporary Canadian Art exhibition, Empire of Dreams, Phenomenology of the built environment, curated by David Liss, as well as included in Brave New World at the Queensland Center for Photography in Brisbane Australia.

Trautrimas has also exhibited at the Eckhart Gallery in the Hague, Netherlands, Johansson Projects in Oakland California and featured at photoLA and Art Chicago. Trautrimas has been featured or reviewed in print and online press in Canada, the US, Germany, the Ukraine, Russia, and China.
digital photography photographic art toronto art scene visual arts in toronto