the sankofa trilogy
written and performed by d'bi.young anitafrika
October 22 to December 4, 2011
at the Tarragon Theatre, Toronto 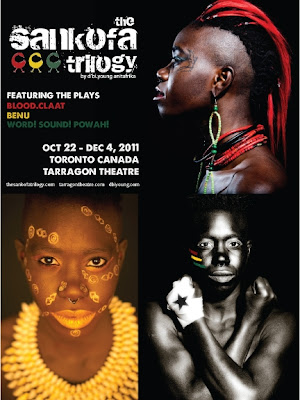 featuring word!sound!powah!
in repertory with blood.claat, and benu
Trilogy Premiere


yuh tink you can stop the people?
my granny told me about you.
she prepared me for you.

A storyteller emerges from the darkness. She sings the story of her people, beginning with their hope-filled birth to their decline into destruction and despair. She implores them to wake from their slumber, remember themselves, and return to the land they love.

As she finishes her song, we suddenly find ourselves in a police interrogation room in 1980s Kingston, Jamaica. The brutal Constable Brown relentlessly interrogates a young woman named Benu. He suspects that she is an accomplice in a heinous politically-motivated crime - but he has no proof. All he knows is that Jamaica is in the midst of a tense and hotly contested election campaign that has cost many politicians and supporters their lives, and it's his job to find the culprits.

In word!sound!powah! young dub poet Benu Sankofa is swept up in the violence of the infamous 1980 national election in Jamaica. The country is on the cusp of a political coup, and in the heat of the struggle between young radicals and the establishment, Benu is arrested. She finds strength in her maternal ancestors to fight for the freedom she believes in.

blood.claat (part one of the trilogy)
mugdu sankofa, a fifteen-year-old girl from Kingston, Jamaica, begins her journey into womanhood under the watchful gaze of her granny. With her mother gone to Canada, Mugdu chafes against the limitations imposed on her by her grandmother's generation - even as she looks to her ancestors for strength. Like her mother and grandmother before her, mugdu attempts to embrace her femininity as she navigates the perennial danger that plagues the young women in her family: pregnancy. blood.claat received two Dora awards in

benu (part two of the trilogy)
mugdu's daughter sekesu a new mother. Painful memories of her upbringing - her separation from her mother - surface with the pregnancy and birth, and collide with her expectations of motherhood. Can she be the mother she never had? There is hope in her daughter, benu, named after the mythical Egyptian predecessor of the phoenix, which rises from its ashes.

d'bi.young anitafrika is an internationally celebrated afrikan-jamaican-canadian dubpoet, performer and educator. The published author of two collections of poetry, six plays and six dubpoetry albums resides in Cape Town, where she is Curator of Badilisha Poetry and of the Pan Afrikan Performing Arts Institute.

70 minutes with no intermission.
sensitivity warning: incense is burned during the performance.

From her latest CD: