Me and Nuit Blanche 2011 - the Morning After 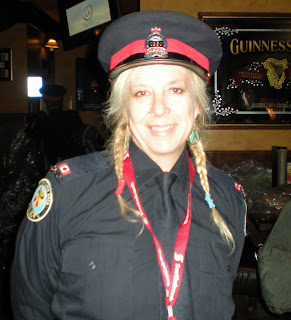 TORONTO - I decided a couple of years ago that Nuit Blanche would be even more fun if I was actually involved in one of the projects and this year I was cast as part of Vancouver based artist Althea Thauberger's great performance experiment, The Police Station. Clearly, last year's G20 episode is still fresh on everyone's mind - but the intent was to have a little fun with the idea of how the police and security forces operate in these situations in a lighthearted way, without directly referencing those events.

The idea was, we were "patrolling" the block (around the 600 block of Yonge at Gloucester), "arresting" people for various offenses, which over the course of the night included things like chewing gum, wearing red, not 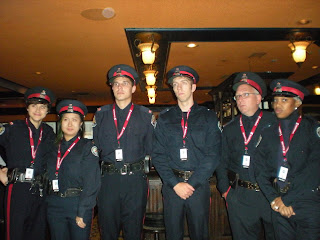 dressing warmly enough and many for loitering. Officer Primus' specialty was indicted people for an identity crisis. Our suspects would then be processed and detained for a period of time (minutes) in our mobile office compound before being released. Sound simple. Crowds and crowds of people came and begged to be arrested and everyone emerged with a smile on their face. Many also wanted to have their pictures taken with us and we'd even see people stalking the windows of the Station with their camera lens when we were all inside. The fun part seemed to be appreciated by many, in other words, but the whole experience had an unexpected and sometimes darker side that all of us non-officers felt. (Officer Kay, Officer Primus, Officer Bubbles, Officer Wazowski, Officer Fife and Officer Jones, aka Crystal J. Grant-Stuart) 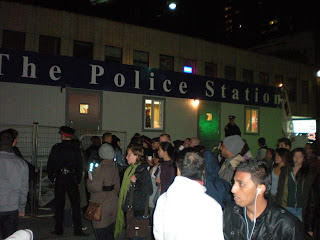 From the moment we put on the uniforms (ably supplied by a theatrical costumier with the unfortunate name of Thunder Thighs) and trooped from the Nuit Blanche HQ on College up to our site on Yonge Street, there was this immediate sense of solidarity. We were a unit, we worked in teams and we shared a common experience. Also unexpected - we all looked kind've hot in that scratchy blue uniform.

The most startling aspect was the way the rest of the world suddenly looked on us so differently. Walking along the crowded sidewalks, people would immediately avert their eyes. We were invisible, yet hardly ignored. At one point, my partner Officer Abell and I were strolling down the street and a couple hovered just behind us. We were taking our time and yet they wouldn't pass by (much like cars on the highway who won't pass a cop even if he's only driving 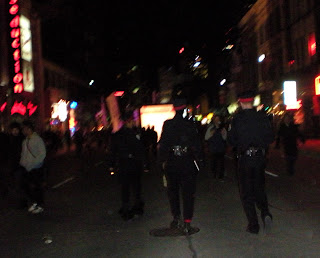 80kph), not until they happened to notice something or other that gave us away and then suddenly sped by.

But most people, particularly as we strolled a bit farther down the block, didn't seem to question the blue uniform, and while many looked away, others simply glared with open disgust on their faces - especially when Officer Abell was enjoying a coffee and donut on our patrol. I made a joke about arresting someone and was subjected to a very deliberate and malevolent stare (sorry about the confusion sir, but I'm afraid it didn't quite have the political message that you thought).

I lost count of how many times I heard fucking pigs! behind my back, and I think all of us 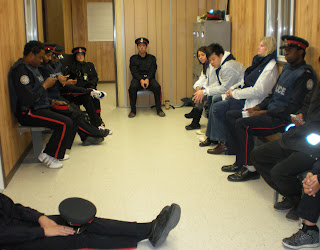 were confronted at one point or another by someone with an ax to grind. On the flip side were the kids (never older than their early 20s) who would come by to say hey, I think you guys are doing a great job!. I think most bizarre were those who were aware that it was a performing arts project, and that we were actors in costume, and still wanted to get in our faces with some kind of anti-police propaganda tirade. I'm not sure what kind of political statement you all were trying to make with a bunch of actors. (L-R Officer Hinds, Officer Archie, Officer sorry I can't see your face, Officer Officer (back wall), Officer Wazowski, Nuit Blanche volunteers, Officer King) 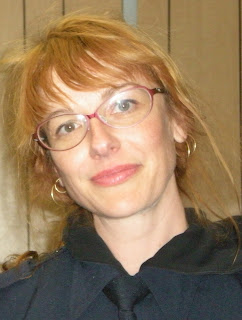 There were those who seemed to take great pleasure in denouncing us as fake police, or pointing out our non-regulation footwear - yes, along with my nosering, pigtails with coloured elastics and dangly earrings, it was part of our collective attempt to deliberately stray from the uniform and avoid confusion with actual police. Kudos to Captain Obvious! As a strategy we had mixed results, as noted; Officer Warner's mukluks were definitely the crowd favourite. There was even a lady who accused me of coming out of character at about 5am. At that point, I was doing well to remain upright and hold a coherent conversation of any kind. I think we also came to understand the scourge of paperwork involved in the policing process, even with our very simplified one page version. (Artist Althea Thauberger aka Captain Al)

I do know that we all emerged with more understanding of how life is like behind that blue line. We got to feel what it's like to be treated as if we were cops, and it wasn't pretty. Some of us were even starting to understand police techniques in things like crowd control, (especially my impressively imposing colleague, Officer Officer). The thin blue line indeed. 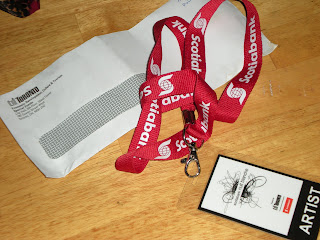 Who knew that 12 hours in blue serge would open my eyes like that? So I'll end with a big mwa to the Toronto Police Services, and several more with an XOX to my fellow comrades in non-arms for the evening, the City of Toronto and Nuit Blanche organizers, the wonderful people at Pogue Mahone's Irish Pub on College and their wonderful food, and artist Althea Thauberger for allowing me to be part of this unique project.
civic art nuit blanche 2011 performance art site specific art project toronto arts festival vancouver based artist