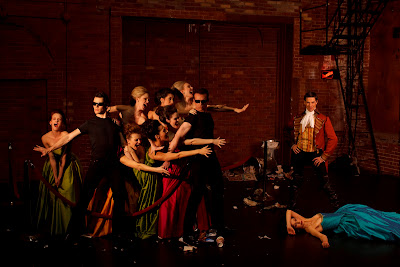 conductor Stefano Montanari makes his Opera Atelier debut. The new production runs October 29, 30, November 1, 2, 4, and 5, 2011, at the Elgin Theatre, 189 Yonge Street. All performances begin at 7:30 pm, with the exception of the Sunday, October 30 3:00 pm matinee. As previously announced, Don Giovanni is also part of Opera Columbus’s 11-12 season, and will be performed by the Toronto company in Columbus, Ohio on November 25 and 27, 2011.

Mozart’s outrageous comedy tells the tale of an incorrigible young playboy who blazes a path to his own destruction in a single day. Based on the story of Don Juan, Don Giovanni follows a skirt-chasing youth who s loved by women almost as universally

as he loves them. His luck begins to turn at the beginning of our story, and we soon see that even he cannot escape the consequences of his actions. Featuring soaring music, bloody fights and mistaken identity, Don Giovanni stands as one of Mozart’s greatest comic masterpieces.

“We are thrilled to be creating an all-new production of this spectacular opera, having achieved such success in North America, Japan and South Korea with our previous production,” enthuses Opera Atelier Founding Co-Artistic Director and Don Giovanni director Marshall Pynkoski. “We believe that Mozart wrote Don Giovanni as a true comedy about a young man who is innocent in many ways. This interpretation is in line with Mozart’s own, though it sets us apart from many modern productions.”

The production features a stellar cast, including many artists making their professional role debuts. Canadian baritone Phillip Addis, who created a sensation as the Count in OA’s 2010 production of The Marriage of Figaro, will make his debut in the title role. Career highlights include a highly acclaimed Paris debut in the title role of Pelléas et Mélisande with l'Opéra Comique, conducted by Sir John Eliot Gardiner, and the title role of the rarely performed baritone version of Massenet's Werther with l'Opéra de Montréal.

Vasil Garvanliev (Leporello) is a Macedonian Baritone who achieved star status in his native country at the age of seven. He has appeared in Don Giovanni before as Masetto and the title character, but will be making his debut here as Leporello. He has just been signed by IMG Artists. Mr. Garvanliev will also be appearing in Opera Atelier’s Armide as Aronte.

Soprano Carla Huhtanen (Zerlina) is an Opera Atelier favourite who is best remembered for her Dora-nominated performance as Susanna in 2010’s The Marriage of Figaro. Ms Huhtanen was one of Now Magazine’s Top Ten Theatre Artists in 2008, and her “amazing versatility and unwavering voice” won her a place on Eye Weekly’s Top Ten Great Individual Achievements List of 2007. She will also be appearing in Opera Atelier’s Armide as Phenice/Lucinde.

Soprano Peggy Kriha Dye (Donna Elvira) recently made her debut with The Chamber Music Society of Lincoln Center in Loeffler’s Quatre Poems and Maw’s Roman Canticle. A former Adler Fellow, Ms Kriha Dye has performed many roles with San Francisco Opera including Musetta, Poussette, Drusilla, and Gretel. She played the Countess in Opera Atelier’s 2010 production of The Marrriage of Figaro. She will play the title role in Armide this season.

Up-and-coming soprano Meghan Lindsay (Donna Anna) was a young artist with Opera Studio Nederland in the 10-11 season, where she made her international debut as Euridice in Pierre Audi’s production of Monteverdi’s L’Orfeo and her Concertgebouw debut performing excerpts from Don Giovanni and Le Nozze di Figaro. In spring 2012, she will sing Sidonie and Nymphe des Eaux in Armide.

Beloved Opera Atelier baritone Curtis Sullivan (Masetto/Commendatore) has been performing with Opera Atelier for over 15 years. He starred as Count Almaviva in Opera Atelier's Le Nozze di Figaro in Toronto and Tokyo and he has also been heard for Opera Atelier in Charpentier’s Medée, as Sarastro in Die Zauberflöte, Neptune in Idomeneo and Aeneas in Dido and Aeneas.

• Tickets for Don Giovanni start at $33 and can be purchased through Ticketmaster at 1-855-622-ARTS(2787)
• or www.ticketmaster.ca
• or at the Elgin Theatre Box Office (189 Yonge Street).
• $20 Operatix tickets may be purchased by patrons under 30 in person at the Elgin Theatre Box Office or online with the code OPERATIX. (Subject to availability. Valid I.D. required at pick-up.)
• Group discounts (10+ people) are available by calling 416-703-3767 x222.
• For more information, visit www.operaatelier.com.
classical music comedic opera don giovanni mozart opera in toronto period opera