The classically-trained players of the Real Vocal String Quartet have lost it. As can be witnessed on their most recent debut eponymous recording and in concert, they bang on their violins, stomp their feet, and allow African trance music to influence their take on old timey standards. It's not their sanity that's missing; what RVSQ has lost is the ability to abide the constraints of either the old school classical world, where 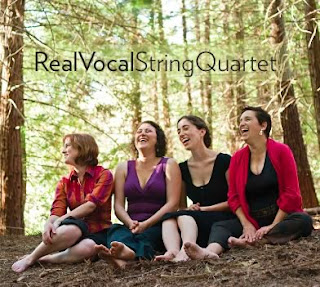 musicians must frequently forsake their creativity for the overall sound of the orchestra, or the often unapproachable reaches of the contemporary classical world.

“There is a perception that ‘new music’ for classically trained musicians needs to be difficult or inaccessible,” says Dina Maccabee, a violist in the group. “We are all totally into challenging ideas but we also like pop music. And we feel like just because you have a highly trained skill set doesn’t mean you need to play obscure music.” Their simultaneous singing and stringing—a barrier buster in itself—may just be the perfect combination for straddling these musical worlds. Catch them this October in East Coast cities including in Washington DC and New York City.

The diversity of the four players’ experiences reverberates through their latest album. For instance, “Talking Strings, Talking Drum” imitates on Western strings the totally unique sound of the African talking drum. “I find myself most fascinated and soothed by rhythmic texture these days,” said Irene Sazer. “I was listening to these intricate rhythmic sections and the scintillating vocals of African music.” “Talking String, Talking Drum” exemplifies the breadth of influence in the group as well as their desire to work outside the norm. The Quartet makes use of the talking drum in an undeniably unconventional way and it works beautifully.

“Kothbiro,” the jaw-dropping first song on the album was composed by Ayub Ogada, a Kenyan artist who’s known for entrancing vocal melodies accompanied on his nyatiti, plucked lute, on Peter Gabriel’s Real World Records. In Irene Sazer’s meticulous arrangement, the Quartet sings Ogada’s lyrics phonetically—just as his cult following audiences did on his rare U.S. performances—without speaking the language, and their violins, viola, and cello transform as they take on the swirling and rhythmical melody of his lyre.

The Quartet’s global influences run through their music, often sneaking into unexpected places like the group’s take on the bluegrass standard “Kitchen Girls.” Dina Maccabee was digging deep into the roots of 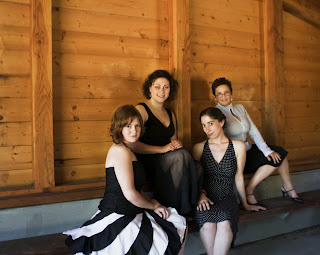 Americana when she wrote this song. She’d been taking fiddle lessons and wanted to push this song beyond the typical groove expected in a bluegrass tune. Meanwhile, she’d been listening to “Amassakoul” by Tinariwen, a musical group from Northern Mali’s Sahara. Tinariwen are known for their invigorating fusion of trance with electric rock guitar. “I was looking for something that was more unexpected,” Maccabee recalls. “So while looking for a way to play ‘Kitchen Girls’ in a new way, I found this kind of groove from Tinariwen. That’s how my musical life works. There are always these different influences.”

The Quartet’s tight bond is only helped by being an all-women’s ensemble. “I feel like I’m playing with my friends,” says Irene Sazer. The fact that every member in the band is a woman is not entirely an accident. “Many of the groups we’ve played in the past with have been mostly male,” said Maccabee. “I think in some ways this could be in reaction to that. I think we just enjoy working in a space away from the ‘dudeness of band practice.’”  More precious than their femaleness is the mutual desire to work together collectively and to explore string and vocal music.

Wherever they began individually, together, the players in Real Vocal String Quartet have gone somewhere entirely new. Their chemistry as a musical group has become a catalyst for a creative explosion. They’ve taken their classical and jazz training, and combined it with their talent and other forays for their debut album. African, Brazilian, Balkan, Bluegrass: they’ve stretched beyond the conceived limits of string music. It may seem like they’ve absolutely lost it, but it doesn’t take an expert to see that they’ve known where it was the entire time.