Toronto - After playing to sold-out crowds and receiving unanimous critical and popular acclaim, VideoCabaret is announcing that The Life and Times of Mackenzie King, the latest re-imagining of playwright Michael Hollingsworth's acclaimed The History of the Village of the Small Huts cycle, is set to close December 11, 2011.

As shows are selling out quickly, VideoCabaret urges the public to book early! Call the box office at 416-703-1725 and visit www.videocab.com for more information.

VideoCabaret presents
The Life and Times of Mackenzie King
The History of the Village of the Small Huts, 1918-1939
Previews November 2 - opens November 10, 2011

Toronto - VideoCabaret proudly presents Michael Hollingsworth's The Life and Times of Mackenzie King, The History of the Village of the Small Huts, 1918-39, at The Cameron House, previewing from November 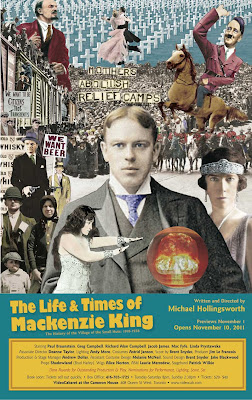 2 and opening on November 10 for a limited run.

Michael Hollingsworth's History Plays always bring the past to vivid life, and simultaneously remind us of today's headlines. The Life and Times of Mackenzie King spans the Roaring Twenties and Dirty Thirties, and resonates powerfully in our boom/bust times. The play stars Canada's most eccentric and enduring Prime Minister, and features a panoramic cast of power-brokers, war vets, socialites, fascists, communists, gangsters, work-camp hobos, crystal ball readers, booze-smugglers, and other Canadians.

The Life and Times of Mackenzie King premiered at The Theatre Centre in 1993, winning Dora Awards for PRODUCTION and LIGHTING, Nominations for PLAY, SET, COSTUMES, MUSIC, ACTING. (In all seven categories, King vied with VideoCab's The Great War, which won for Play and Costumes.) King also earned the Chalmers Award for Outstanding PLAY; and in 1995 was remounted with Factory Theatre. VideoCab's plays and stagecraft have won more than twenty Dora Awards and over sixty Nominations. 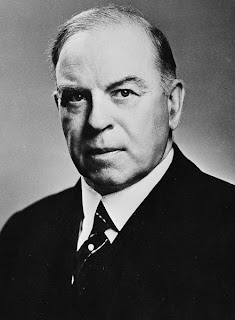 Play Synopsis:
The Life and Times of Mackenzie King begins with the end of World War I, and ends with the beginning of World War II - a zeppelin-ride through the soaring twenties and the diving thirties with Canada's longest-running Prime Minister. As the grandson of the notorious rebel William Lyon Mackenzie, King was driven by a sense of destiny and spurred by ghostly outriders. He fell in love regularly but never married, preferring the companionship of other men's wives, and seances with his late mother and other great departed souls.

King's occult companion Mrs. Joan Patteson, beloved dog Pat, political foes Prime Ministers Meighen and Bennett, contemporaries James Shaver Woodsworth and Samuel Bronfman, are joined in the play by Joe and Vince, a couple of Great War veterans who find employment in the rum-running business, and Molly, a war widow with nothing left to lose.  Vince rolls it all on the gal and the hooch, while Joe never stops fighting whatever is fighting him - union-busters, gangsters, mortgage-holders, work-camp bosses.

Between the shadows of two world wars, ideas clash and markets crash. The action spans the Winnipeg Strike of 1919, the One Big Union movement, the King-Byng Crisis, the Great Depression, the 'On To Ottawa Trek', Mackenzie King's infatuation with the Third Reich and many other events that show how Canada discovered its inner communist.