• All performances at the Toronto Centre for the Arts – Studio Theatre

Toronto, Ontario... Angelwalk Theatre is thrilled to announce its exciting 2011-2012 lineup. This marks their third season producing some of Toronto's best productions of off-Broadway musical theatre as a

professional theatre company in residence at the Toronto Centre for the Arts. Angelwalk Theatre will be producing a brand-new musical revue, Off-Broadway On Stage, and the Canadian Premiere of I Love You Because, a modern day musical love story.

Conceived by Angelwalk Theatre's Artistic Producer, Brian Goldenberg, Off-Broadway On Stage is a musical journey through the world of off-Broadway, featuring songs from many popular and long-running off-Broadway musicals, including some that eventually made the move to Broadway.  From The Fantasticks to Altar Boyz or Jacques Brel is Alive and Well and Living in Paris to I Love You, You're Perfect, Now Change, this off-Broadway musical revue will charm and delight. 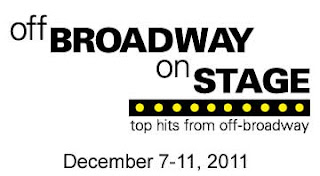 I Love You Because is a modern musical twist on Jane Austen's Pride and Prejudice, with Music by Joshua Salzman and Book and Lyrics by Ryan Cunningham. Set in New York City, a young, uptight greeting card writer's life is changed when he meets a flighty photographer.  Along with their eccentric friends and siblings, they learn to love each other not in spite of their faults, but because of them.  Declared "infectiously entertaining!" by The New York Times and "the perfect date musical" by Talkin' Broadway, I Love You Because is "everything an Off-Broadway musical should be...a charming piece of work that will send you home smiling" (The Wall Street Journal). I Love You Because is a hilarious new musical that will have audiences smiling in their seats.

Moore nomination.  In addition to his work with Angelwalk Theatre, Anthony has been the resident musical director at Stage West for 10 years where he has performed in 35 productions.

Darcy Evans makes his Angelwalk Theatre debut as the Director for I Love You Because.  Darcy recently directed Lucy Peacock as Cleopatra in his adaptation of Shakespeare's Antony and Cleopatra in the Studio Theatre at the Stratford Shakespeare Festival.  Darcy was the Associate Director for Little Women on Broadway (starring Sutton Foster) and remounted the Broadway staging for the first U.S. national tour (starring Maureen McGovern). Darcy was invited to participate in the inaugural Michael Langham Workshop for Classical Direction by the Stratford Shakespeare Festival, and worked there for 7 Seasons as an actor and associate director.

Angelwalk Theatre distinguishes itself in the Toronto musical theatre scene by being producers rather than presenters, focusing on quality mid-sized musical theatre and working towards developing an 'Off-Broadway' community in Toronto. The company prides itself on providing employment to Canadian artists at all levels - performers, directors, designers, technicians and production staff.

• Patrons under the age of 30 can also purchase single tickets for all Angelwalk Theatre productions for as little as $25 per show, a savings of up to 44% off of the regular ticket price.  Group rates and school matinee performances are also available.
• As a thank you to its patrons, Angelwalk will continue to pay the HST for all weeknight and weekend matinee performances in its 2011-2012 Season.
angelwalk theatre canadian theatre musical theatre toronto theatre scene