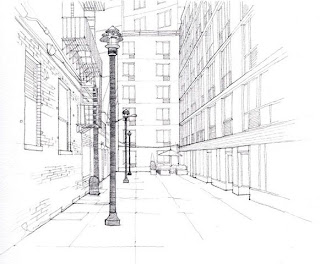 NEW YORK CITY - Public art meets the street in this rotating installation within the East Village's favorite alley. Tucked behind the former CBGB's and between several galleries, including La MaMa E.T.C.'s La Galleria, The Hole, and The Proposition. Artist Alley @ Extra Place transforms this hidden street into an inviting corridor enhanced with artwork, literally from the ground-up. The inaugural exhibition, Groundbreak will feature work by New York City artists Abe Lincoln Jr., Jon Burgerman and Ellis Gallagher. This exhibit is part of a series of temporary public art installations produced through FABnyc's ArtUp program. Come see artists reclaim the sidewalks as their blank canvas!

ArtUp Mission
The mission of FAB’s ArtUp is to reinvigorate spaces under construction through public art and community partnerships. With more than $17 million in renovations to the East 4th Street Cultural District underway, ArtUp transforms construction sites and scaffolding into a street-side gallery. ArtUp is generously supported by the 70 East 4th Street Cultural Center, future home of Downtown Art and Alpha Omega Theatrical Dance Company.

Abe Lincoln Jr.’s first solo show was at the Orchard Street Gallery in the Lower East Side titled Taqueria Pendejo, 2005, was a multi-media exhibition which featured unsolicited fictitious menus for its “customers”. Over the years, he has manifested a slew of playful and mischievous characters that are an extension of his angst on paper, stickers, canvas, board, buildings and hand cast resin, i.e. Globulon. In addition to creating work as a solo artist, he closely collaborates as a member with a group of artists called the Endless Love Crew (ELC), which include El Celso, infinity and Royce Bannon. Abe Lincoln Jr.’s recent group show, Le Petit Monstres at OhNO!Doom Gallery, Chicago feature 13 of his monsters.  Although the cute sarcasm of

his work and its outdoor appliqué may appear that it falls under street art, his work doesn’t play the “name that genre” fiddle. Abe Lincoln Jr.’s latest sticker campaign, “Fucking Hipsters” is a prime example.

Jon Burgerman is an Englishman who is currently based in New York. He not only wears bathrobes in his home but if he fancies it, also to work. He delivered such a performance in public this Summer, drawing all over a car at Crest Fest in Brooklyn. He has extensively exhibited his much sought-after work internationally. In 2009, his second solo exhibition in Beijing, China entitled, Economies of Scale (pictured above), was a massive socioeconomic commentary executed in the Burgerman style akin to a Chinese scroll painting. The multiplicity of the characters that are present in his work, which are rich in color, line and gesture, create a ceaseless expansion of a distorted landscape. The aforementioned elements of his work allow him to successfully hover between fine art and design. Burgerman has received Cannes Lions Advertising award and two D&AD Silver awards. In addition to creating two-dimensional works, he is quite 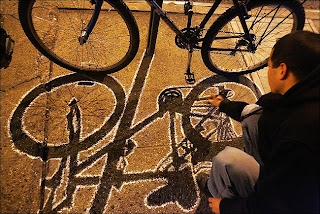 the multidisciplinarian; the artist has an obsession with salad, performs with the band Anxieteam and an online "megastore", Burgerplex.com.

Ellis Gallagher aka Ellis G takes post-midnight strolls through the city streets like it’s 2 o’clock in the afternoon. Although he grew up in the East Village and may be “street-smart”, he was not immune to being a victim of armed robbery. In 2005, Gallagher was mugged with a machete. This experience inadvertently developed Gallagher’s acute sense and awareness for shadows of people, objects, and movement in and on the streets. Instinctively, he outlined the shadows with chalk and ever since, has been inspired to create art for the people. This past October, Ellis Gallagher participated in a 30-artist group show titled, On the Street, curated by artist, Michael DeFeo, which included works by Banksy, Blek le Rat, Lady Pink and Richard Hambleton to name a few. Gallagher began to realize the performative aspect of his art practice and has re-materialized his ephemeral work with photographic reproductions.