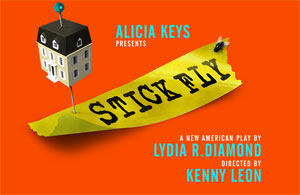 ABOUT
It was a relaxing weekend on Martha’s Vineyard … until the baggage got unpacked.

Meet the LeVays.  When two adult sons independently choose to introduce their girlfriends to the parents on

ALICIA KEYS, Producer: “This is a story that everybody can relate to. I’m passionate about this play because it is so beautifully written and portrays Black America in a way that we don’t often get to see in entertainment. I know it will touch audiences who will find a piece of themselves somewhere inside this house.”

KENNY LEON, Director: “Stick Fly is one of those unique plays with a beauty that lies in its universality.

Lydia Diamond is a master storyteller, combining humor with intellect. Her reach is as great as my friend August Wilson – her poetry and the world of the characters may differ, but the results are the same: an evening full of laughter and hought that keeps us talking long after we’ve left the theater. I love plays where everyone can find themselves in the story on stage.”

LYDIA R. DIAMOND, Playwright, will make her Broadway debut with the premiere of Stick Fly. Her other work includes Voyeurs de Venus, The Bluest Eye, The Gift Horse, Stage Black and Harriet Jacobs. She is a faculty member of Boston

University and has had her works produced across the country.

The play has been seen regionally at such theaters as the McCarter Theatre in Princeton, NJ, Arena Stage in Washington, DC, and the Huntington Theater Company in Boston.

When it comes to family... you're stuck


Stick Fly on Broadway
Produced by Alicia Keys with Reuben Cannon & Nelle Nugent
Directed by Kenny Leon
Written by Lydia R. Diamond
Running Time: Approximately 2 hours and 30 minutes, including one intermission
Audience: May be inappropriate for 12 and under. Children under the age of 4 are not permitted in the theatre.
Cast Members: Dulé Hill, Mekhi Phifer, Tracie Thoms, Ruben Santiago-Hudson, Rosie Benton, Condola Rashad