Ethiopia isn’t usually the first locale that comes to mind when one thinks of music made with acoustic guitars, accordion, mandolin and clarinet. Yet those instruments are at the core of Tewesta “Remembrance” (World 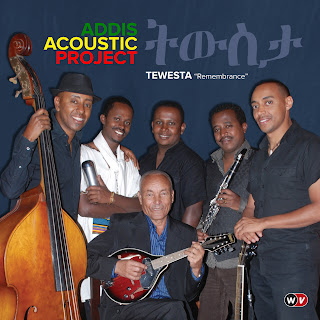 Village), the new release by Addis Acoustic Project, a sextet that transports instrumental Ethiopian pop hits from the 1950s and ’60s into the modern world. Informed not only by classic African music but by jazz, Latin and other styles, AAP creates an intoxicating, charming blend of sounds that Mondomix.com called “a gentle groove with carefully rounded edges.”

Addis Acoustic Project is the brainchild of Girum Mezmur, who directs and arranges the music as well as contributing acoustic and semi-acoustic guitars, accordion and vocals. Each of the other musicians—Ayele Mamo (mandolin, vocals), Dawit Ferew (clarinet, vocals), Henock Temesgen (double bass, vocals), Nathaniel Tesemma (drums, percussion) and Mesale Legesse (kebero, darbuka, bongos, hand percussion), plus Ahmed Elmak (oud on one track) and Endris Hassen (massinko on one track)—is a virtuoso who brings a full spectrum of musical colorings to this gentle but lively music, rich in history and now speaking to a new generation.

Addis Acoustic Project, on Tewesta “Remembrance”— the title is in the Ethiopian Amharic language — seamlessly fuses the traditional with the contemporary. For those who grew up with access to Ethiopian music during the mid-20th century, this is music that will be instantly familiar. But even for those who did not—and that would include the vast majority of Westerners—these are songs that feel comfortable and homey, melodies and rhythms that grab hold upon the first listen. 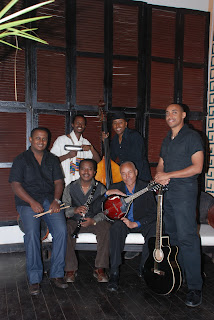 AAP was formed by Girum Mezmur with the intent of finding common ground between the authentic Ethiopian pop sounds of a bygone era—specifically the era just preceding what many consider the “Golden Age” of Ethiopian pop—and jazz, and then bringing it up to date in something wholly fresh-sounding. Mezmur carefully chose the instrumentation for the band, building it around his own accordion playing and other instruments that were commonly used in the Ethiopian pop he wanted to revive, including double bass, drums, clarinet, mandolin and the kebero, a cone-shaped, double-headed hand drum native to Ethiopia. After choosing the instrumentation, Mezmur set about finding the ideal musicians for his dream band, auditioning prospective members until he felt that the connection between them was just right.

Only then did Mezmur begin to assemble a repertoire, scouring record stores and old radio station playlists and speaking to individuals who remembered the era. The group debuted in March 2008, honing their sound at countless gigs and ultimately heading into the studio in Addis Ababa in 2009 and ’10  to cut the songs that now comprise Tewesta “Remembrance”. Girum Mezmur produced the sessions.

The vast majority of the tunes collected on this recording revolve around the emotion most common throughout the history of music: love. The translations give that away quickly: “Fikir Ayarejim,” which means Love is Eternal, was a popular song, made famous by Ethiopian vocalist Menelik Wossenachew, that originated in Sudan. AAP’s interpretation features the great Sudanese oud master Ahmed Elmak guesting. Other highlights include “Enigenagnalen” (We Shall Meet Again), a love song originally by Girma Negash that speaks of hope, and “Yigermal” (Such a Beauty…What Are You Called?), a traditional folk song that features mandolin and clarinet. 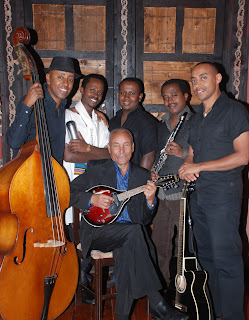 Perhaps the song that best sums up the mood and feel of Tewesta “Remembrance”, however, is “Yetintu Tiz Alegn,” whose title translates to Remembrance or, more specifically, Remembering the Olden Days. Originally made popular by Ethiopian singer Tilahun Gessesse, it was also recorded by the legendary late South African singer Miriam Makeba on her smash hit Pata Pata album in 1967. With its alternately elegiac and celebratory rhythms, global vibe and clustered harmony vocals, it’s a tour de force that perfectly encapsulates the then-and-now motif Mezmur had in mind when he initially conceived the group. The jubilant track mirrors the excitement generated at an AAP gig, where audience interaction is not only common but expected.

For Mezmur, the emergence of Addis Acoustic Project has been the realization of a lifetime goal. After finding an accordion in his Addis Ababa home that belonged to his uncle, Mezmur became, well, mesmerized, obsessively learning the instrument and then moving on to guitar, piano and arranging music. Citing a diverse list of influences ranging from Ethiopian guitarist Selam Seyoum to the late American jazz master Wes Montgomery, Mezmur honed his chops while learning music theory and the art and business of leading a band. Attending the Yared Music School in Addis Ababa and working with different bands gave him experience and insights, all of which he draws upon now as the creative force behind AAP.

In his liner notes to Tewesta “Remembrance”, Mezmur writes, “The essence of this project is about presenting the music of that era [the ’50s and ’60s] in an authentic manner, yet with a new twist. Equally important is also preserving the sound and instrumentation of those days. I hope this recording captures these elements and does justice in these respects.”

Undeniably, it does, but what ultimately makes Tewesta “Remembrance” such a winner is that one need not even know that these are old songs remade for today’s world in order to fall in love with them. Addis Acoustic Project, on Tewesta “Remembrance”, has gone beyond its own stated goal and has created music that is truly timeless.