on November 21, 2011
Nacional Records sent me this download and I can't stop listening to it. Luckily I can pass along a free download from the CD that's coming out today.

Here's a taste of the CD - Ritmo Machine's "Maestro":


The album has made an impressive early arrival at radio, debuting at #17 at KCRW in Los Angeles and #1 on the World music chart at KEXP in Seattle. With a funky blend of hip-hop beats, live instrumentation and 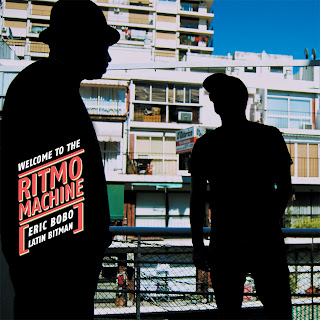 Eric Bobo, who recorded and toured with the BEASTIE BOYS during their groundbreaking albums 'Check Your Head' and 'Ill Communication', has been a full time member of Cypress Hill since he first connected with the legendary hip-hop crew at Woodstock in 1994. Earlier this year, Bobo's infectious percussion was featured on Cypress Hill's hit single "Armada Latina" along with Marc Anthony and Pitbull. Latin Bitman's 2010 album 'Colour' was described by 'Billboard' as "a musically adventurous collage of dub, bossa nova, lounge, hip-hop and electronica" and was featured EA Sports' soccer-themed video game 'FIFA' and TV shows such as 'Dexter' and '90210'.