A songwriter dedicated to uniting folk song tradition with today’s stories, Jon has an uncanny ability to press his ear against the heartbeat and the soul of the times we live in.  In only 4 years, he has been nominated twice for a Canadian Folk Music Award (Songwriter of the Year), been profiled on CBC Television, named the Musician to Watch in 2010 by the Toronto Star, garnered an OCFF Award, and took home the US Mountain Stage NewSong Contest (NPR).

Jon's music is also featured on Neil Young's Livingwithwartoday website and he recently won both the coveted Kerrville New Folk Competition in Texas, the International Songwriting Competition (Folk category), and placed as a Finalist in the Music2Life Contest (run by 'Paul' of 'Peter, Paul & Mary' fame). 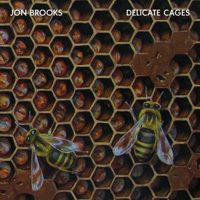 All this might not have happened prior to 2006.  In fact, upon his return from a 1997 trek throughout war ruined Bosnia-Herzegovina, Jon quit writing songs and performing, claiming, "I'm at least a 1000 books and emotions shy of earning the right to stand behind a microphone."  8 years of musical silence later, and at the suggestion of one of his Canadian literary heroes, Austin Clarke - Jon wiped the dust off his Taylor Jumbo 615... there's been no stopping him since!

Indeed, Brooks is now offering up his 4th collection of songs-- DELICATE CAGES. The album covers a handful of current Canadian/World issues from the perspective of freedom and enslavement, with a concurrent and equally important theme running throughout the songs: the argument that the opposite of love is not hate, but is in fact, fear.

Brooks blames humanity for blaming God for all its ills, and remains incredulous over our self-destructive, warring ways. He spurs us to find answers to big questions and his approach is tough to avoid. There’s a method to his madness – ever-hopeful in spirit that we will find our way to spiritual renewal, forsaking fear

for love and choosing healing over the pain we cause each other.

The delicate cages we hide behind are forms of enslavement - from the poignant, sombre “Because We Are Free” to the rootsy, upbeat “Fort McMurray” (with a beautiful assist by Lynn Miles), Brooks is the master mood-maker. The song “Mercy” moves skyward on the strength of the wordplay alone while “Hudson Girl”, written for his wife is a toe-tapping love song underscored by an English/French political backdrop. Brooks’ vocals, harp and banjitar joins Scott Dibble on vocals, Joe Phillips on bass and John Showman on violin – coming up with more than a hearty tapestry of sounds than four players should be able to bring.

The lighter than air “Madeline” rides on Showman’s violin and Brooks’ banjitar, complete with whistled chorus, offsetting the darkness of “Cage Fighter”. Pouring his voice over his words like a perfect jus, hope in the face of hopelessness is “Visiting Day” – as a con sings of love from his jailside perch. Honour killing is the sorry subject of “The Lonesome Death of  Asqa Parvez” while “There Are Only Cages” sums up the album’s theme nicely, as Carrie Elkin backs Brooks’ vocal.  Brooks solo piano reprise of the opening song is simply beautiful and at under the 3-minute mark, far too short to close with.  It gives the listener time to think about the content of the 43-minutes that preceded it. Brooks is brewing his own style of Canadiana and, at the same time, making a difference.

As he notes, “I’m not interested in ‘happy songs’ – I’ve chosen to write healing songs and, for that reason, I’m obliged to reveal a wound or two now and then.  I’m even less interested in writing unhappy songs:  I want to write hopeful songs, inspiring songs and I expect I owe today’s listener some hopeful argument – some legitimate reason - as to why we should believe our present world could be improved, or healed.