"Face Off is the qunitessential Canadian hockeyrock film of the 70s. A wild snapshot of who we were, and how we became who we are. All of that, and George Armstrong chugging a stubbie."
- Dave Bidini, author, Tropic of Hockey

(Toronto) Video Services Corp., (VSC) is celebrating the 40th anniversary of the classic Canadian hockey movie FACE OFF with the release of a limited edition Blu-ray/DVD combo pack on November 15, 2011. 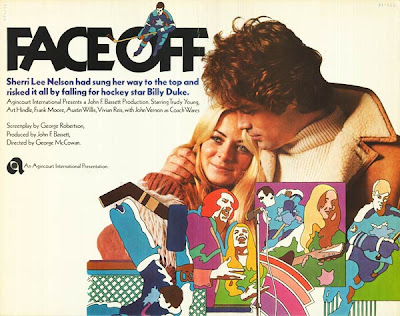 This is the first-ever home entertainment release of this film!

Art Hindle stars as hot young rookie Billy Duke, who comes to Toronto from a small Ontario town to play for the Maple Leafs and coach Fred Wares (John Vernon). His aggressive play shakes up both the league, and local folk rocker Sherrie Lee Nelson (Trudy Young) digs Duke off the ice but can't handle his violent profession.

The film was produced by John F. Bassett, who is a pioneer in Canadian feature filmmaking, among other pursuits.

This was a project close to VSC President Jonathan Gross' heart; aside from being a true hockey fan, he spent years trying to get the copyright holders to offer up even a limited release. Considering this to be buried treasure, Gross believes the 1971 release of Face Off  will inspire the same enchantment 40 years after its original release.

"All in all, the hockey action, shot in 35 mm, much of it during real games and integrated into the story line, is the real hidden treasure in Face Off," says Gross. "For the fan of a certain vintage it will be like uncorking a fine wine that has aged very well."

Leaf fans get about 20 minutes of action in Maple Leaf Gardens and on the road against legendary Original Six rivals of the 70s, including Detroit, Chicago and Boston in many bygone arenas. Dave Keon, Paul Henderson, Brian Glennie, Jim Dorey, Norm Ullman and a young Darryl Sittler are seen facing off against the likes of Bobby Orr, Gordie Howe and Jean Beliveau while Leaf captain George "The Chief "Armstrong has a significant speaking part in the film, along with NHL bad boy Derek Sanderson.

VSC has restored the action-packed, cameo-filled classic from a 35mm print in the Toronto Film Reference Library archive and added commentary from Art Hindle, Trudy Young, and producer Harve Sherman. Nostalgic hockey fans will also be excited by the inclusion of the original theatrical trailer and the equally legendary SCTV parody.