InDigest is happy to announce the Issue #22 Launch Reading!
November 20, 2011featuring Julianna Spallholz, Eric Lindley, Annabelle Yeeseul Yoo, Allyson Paty, and hosted by me, Dustin Luke Nelson, indigestmag.comInDigest editor
The reading is FREE and will be at 7pm at (Le) Poisson Rouge. 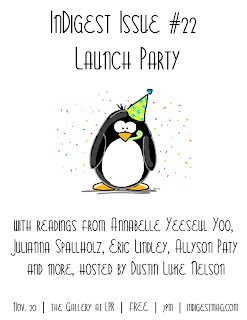 you can shake a stick at.

InDigest also presents InDigest 1207, a reading series that takes place monthly in New York City and quarterly in Minneapolis. In addition to their own work, readers are encouraged to bring in something that has informed or influenced them in some way. The result is often funny, sometimes strange, but always interesting, showing us how we are all constantly influenced by what we see, hear, and read.

Annabelle Yeeseul Yoo is from New York City. She is the recipient of the 2009 “Discovery”/Boston Review Poetry Prize and a 2010 fellowship from the Saltonstall Arts Colony. Her poems can be found in such venues as drunken boat, Denver Quarterly, jubilat, LIT and Western Humanities Review

Eric Lindley lives, writes, makes music (as "Careful") and unclassifiable objects and events in New York. He co-edits [out of nothing], and his writing has appeared in Fence, Joyland, Eaogh, Antennae, Shampoo. His other work has been presented at Machine Project, The Smell, The Knitting Factory, The Santa Barbara Museum of Art, the Baryshnikov Center, and in residence at STEIM. Nonetheless, he is still more concept than instantiation, in the same way that chair-ness is never fully expressed by a physical chair.

Allyson Paty is from New York. Her poems have appeared or will in publications such as Tin House, DIAGRAM, and Boxcar Poetry Review, among others, and her chapbook, The Further Away, is forthcoming from [sic] Press in Detroit. Her collaborations with poet Danniel Schoonebeek can be found on The Awl, HTMLGIANT, and Underwater New York.
free event in new york city indigest magazine le poisson rouge nyc literary event in new york city