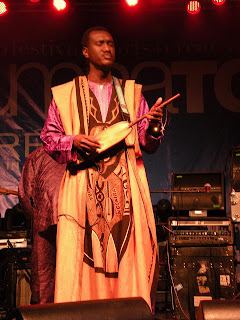 Malian maestro Bassekou Kouyate is a virtuoso picker and musical visionary whose work blurs the lines between West African and American roots music. Bassekou’s instrument, the ngoni, is a ‘spike lute’ and an ancestor of the banjo, sharing its taut-skinned drum body, percussive attack, and varied picking techniques. Since 2005, Bassekou has led Ngoni Ba, the first-ever group built around four ngonis – all played by members of his family.

His debut album, ‘Segu Blue’ was a great success and his next album ‘I Speak Fula’ builds on the success of ‘Segu Blue’. Its 11 tracks provide a star-studded tour of pan-Malian music, including collaborations with Toumani Diabaté, griot vocal legend Kasse Mady Diabaté, master of the horse-hair soku fiddle Zoumana Tereta, and guitar phenomenon Vieux Farke Toure, Ali’s talented son.  Bassekou is a true master of the ngoni and he has collaborated with many musicians in and outside of Mali. He was part of Taj Mahal and Toumani Diabaté’s Kulanjan project, as well as being one of the key musicians on Ali Farka Toure’s posthumous album Savane which was released July 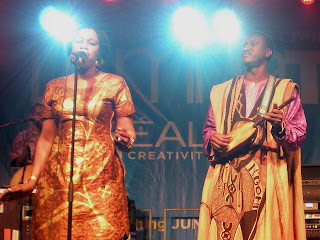 2006. He also collaborated with Bela Fleck on the award winning ‘Throw Down Your Heart’.

Bassekou was born in a village called Garana, almost 40 miles from Segu, in the remote countryside on the banks of the Niger River. He was raised in a traditional music environment, his mother a praise singer and his father and brothers exceptional ngoni players. Bassekou moved to Bamako when he was 19 years old where he met the young Toumani Diabaté. By the late 1980’s Bassekou was part of Toumani’s trio and they recorded their first albums together, ‘Songhai’ and ‘Djelika’. Bassekou married the singer Ami Sacko (the so-called ‘Tina Turner of Mali’) and they have been 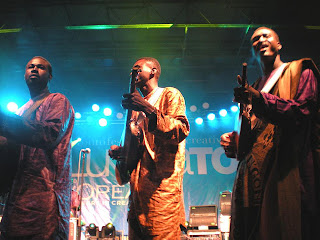 in high demand for the traditional Sunday wedding parties that happen in the streets of Bamako.

Bassekou put together his own band, Ngoni Ba (meaning ‘the big ngoni’), Mali’s first ngoni quartet. The repertoire Bassekou plays is from the region of Segu, the heart of Bambara culture. Unlike Mandinka griot music, Bambara music is pentatonic in nature, music as close to the blues as you can get in Africa.

The opening act is Eritrean-Canadian Daniel Nebiat who sings and plays the krar, a traditional stringed instrument similar to the harp, tuned to a pentatonic scale and in Daniel’s case, amplified.  His music combines both traditional and modern forms of Eritrean music. 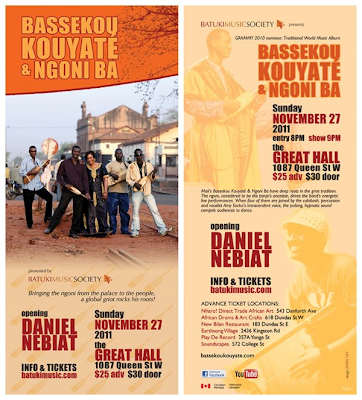