BROOKLYN - There they go, roaring through upscale plazas or past small-town gas stations, purring on stages from Denver to Philly, from Miami to DC. 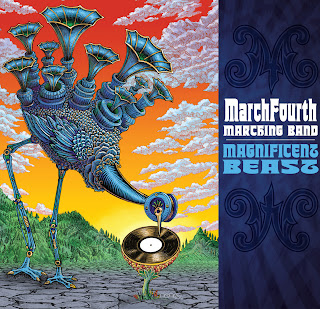 Yes, that is a four-foot-tall cowbell and a bass amp on wheels. And yes, the stilt walker is crowd surfing. Dancers swing, the horns rip through punchy lines, the drums rattle out beats, and someone croons through a bullhorn. The feel mixes Sousa and Sgt. Pepper, a cheerier Clockwork Orange and Mardi Gras mash up.

The MarchFourth Marching Band (M4) wraps the pleasures of a booming brass parade in a hand-stitched Technicolor circus tent. Living and breathing DIY, they’ll make up new routines on their tricked tour bus en route to their next show, or craft quirky clothes to sell at their next gig.

“We started off as an alt marching band. But then we took it to another level,” reflects M4 co-founder, bassist, and bandleader John Averill. “We’ve turned into a dynamic dance band. We get the whole audience”—who sometimes arrive decked out in tutus or walking on stilts themselves—“dancing and moving like a good funk band or an energetic DJ would.” 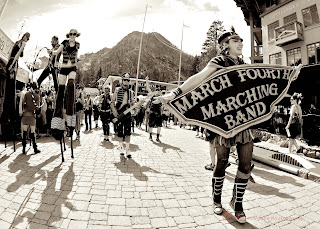 “Except we’re way more mobile,” adds dancer Faith Jennings. “We can get right in the middle of the crowd and really bring the music to the people.”

The cowbell is no more: The albatross of a set piece was auctioned off to fund a tour in Europe.  But its glory lives on (the party-hardy shout-out to Christopher Walken’s Saturday Night Live skit, “More Cowbell”).

And gone are three-mile parades under the blazing sun and the elaborate, venue-scaring fire shows (though M4 still features some good old fire eating).

Yet MarchFourth’s original spirit, born on Portland, Oregon’s bohemian streets (the artsy ‘hood honored by “Fat Alberta”), remains. Improvisation is central. Boundaries and genres are irrelevant, if something works. Irreverence is encouraged.

“We used to use our middle finger to signal the ending of a song,” explains trumpeter Jason Wells, recounting the tale behind the mysteriously named “The Finger.” “With this one in particular, it would get faster and faster until, finally, I would stick up my finger and BAM!  It would all end with a simple little bell ding.” 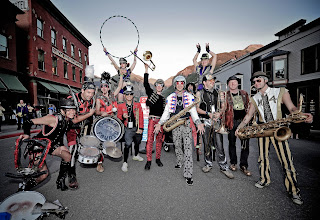 Ambitious plans, from dance numbers to unexpected handmade merchandise and over-the-top props, get executed by band members—and lead to bold and unpredictably catchy leaps. Some of these leaps are literal. “Lots of people can walk on stilts, but not many can do splits while someone else lifts them up,” explains Jennings. “That particular skill with stilts not something you see often, and it’s dazzling to watch.”

Magnificent Beast producer Steve Berlin performed his own feats of daring-do, using all the nooks and crannies at the roomy studio where the band recorded. “We ended up using every space in the building for something,” recalls Berlin, “like a hallway for the sirens on ‘Fat Alberta’ or the lounge for the trombone solo on ‘Rose City Strut.’ It’s hard to fathom how we could have done it otherwise.”

When the band told him that their old friends and collaborators from the Preservation Hall Jazz Band were in town, Berlin grabbed his mobile rig. Between sound check and stage call, the No’leans elders laid down horn parts on the noir-toned “Rose City Strut.” 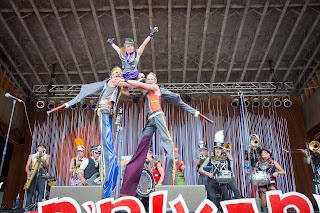 “It blew me away,” Averill recalls. “They killed it, though they had never heard the tune before. One player didn’t’ even get to finish his take because stage manager ran down and yanked him before the last twelve bars. We would never have gotten that, if we’d had to do it in the studio.”

What the band did gain in the studio was a less-is-more power that lets the songs groove harder, often building from spare interlocking parts into full-on metal (“Lesley Metal”) or funk (“Git It All,” a cover of one of the overlooked 70s funk band Mandrill’s feel-good songs).

“We have all the elements in place for complete chaos,” Averill notes with a smile. “We’re like a mini-orchestra, and we become more effective by simplifying what we’re doing. So we’ve streamlined our sound.”

“We have this energy and enthusiasm that people sense instantly,” Jennings muses. “They get sucked in. We love each other and what we’re doing and that’s really obvious to the audience. It’s not just about our dancing skills or special arrangements; it’s about our very real joy.”


Images:
• by Jon Margolis
• by Merrick Chase
• by Jeremy Baron