NEW YORK - LCT3 opens its 2011-2012 season with the world premiere of All-American, by Julia Brownell, directed by Evan Cabnet. 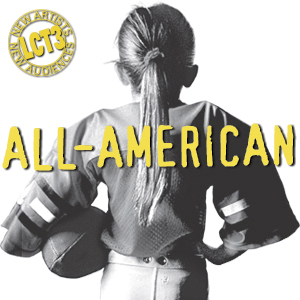 Playwright Julia Brownell is a writer on the critically-acclaimed HBO half-hour series Hung. Her sex comedy feature film was optioned by FilmNation with Jessica Biel attached to star and produce. Her play Smart Cookie was the winner of the 2008 Kendeda Graduate Playwriting Award, which had its world premiere at the Alliance Theatre in Atlanta. Julia's short play Good Girl was produced at the Actors Theatre of Louisville and was a finalist for the National Ten-Minute Play Contest. Her plays have been read/workshopped by the Public Theater, the Minneapolis Playwright's Center, and the Babel Theater Project. She is a graduate of the M.F.A. Theatre Program at NYU's Tisch School of the Arts.

Director Evan Cabnet recently directed the world premiere of David West Read's The Dream of the Burning Boy at the Roundabout Theatre Company. He has directed new plays at a variety of New York theaters including the Cherry Lane, Atlantic Theater Company, the Rattlestick, and Naked Angels. His regional credits include productions at the Denver Center Theatre, the Long Wharf Theater, and Williamstown Theatre Festival.

LCT3 is a Lincoln Center Theater programming initiative devoted to producing the work of new artists and building new audiences.