Sometimes Y Theatre returns to Toronto after a 9 year absence with: 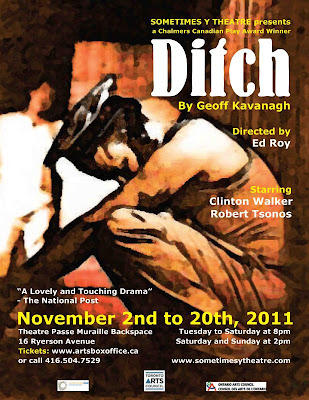 TORONTO - Winner of a Chalmers Canadian Play Award, DITCH by Geoff Kavanagh has not been produced in Toronto since January of 1994. Sometimes Y Theatre returns to Canada after 9 years of producing plays in Tokyo, Hong Kong, and England with this seminal work in the history of Toronto’s independent theatre movement.

Sir John Franklin led an expedition into the Arctic in 1845 in an attempt to complete a crossing of the Northwest Passage. The ships became trapped in ice in the Victoria Strait and all 129 crew members died.

DITCH is a fictional account of two members of the expedition who were abandoned by their shipmates. Whitbread is dying of pneumonia and Hennesey has a broken foot, death is certain. In the face of this cruel fate they are sustained by a heavy dose of gallows humour, a dash of British pluck, their own imaginations, and by love. DITCH is a touching drama and a fascinating character study; full of laughs, tears, and emotional truths that linger long after the curtain has fallen.