Barrie, ON... Talk Is Free Theatre’s Artistic Producer, Arkady Spivak, announced the remaining cast and creative team for the first production in their 10th Anniversary Season, Do You Turn Somersaults?. The production will feature Geordie Johnson, an award-winning Canadian actor, along with the great Lucy Peacock. Rounding out the creative team are Set and Costume Designer Joanne Yu and Lighting Designer 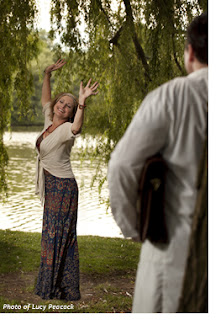 Gareth Crew, along with previously announced Director Marti Maraden. Do You Turn Somersaults? opens November 20th at the Mady Centre for the Performing Arts.

Set in late 1960’s on the shores of the Baltic, Do you Turn Somersaults? charts the relationship between stuffy sanatorium director Rodion and a free-spirited new patient Lydia. He is her doctor; a prickly, reserved man, exasperated yet intrigued by her sparkle and charm. She is enigmatic and eccentric and is clearly no ordinary patient in the sanatorium; she dances in the moonlight, sings at dawn and recites poetry on demand.

Lucy Peacock (Lydia) has spent 24 seasons and starred in close to 60 productions at the Stratford Shakespeare Festival. Favourite credits include Nana in For The Pleasure of Seeing Her Again, all characters in Thee Blonde, the Brunette and the Vengeful Redhead (also at Vancouver Playhouse), Lady Macbeth in Macbeth and Regan in King Lear (Tony Nominated Production). Currently, she can be seen in The Merry Wives of Windsor and Camelot at the Stratford Shakespeare Festival.

Geordie Johnson (Rodion) is an award-winning Canadian actor whose career encompasses TV, film and stage roles. Among his theatre credits are eight season at the Startford Shakespeare Festival, playing such diverse roles as Richard in Richard II, Mr. Darcy in Pride and Prejudice, Biff in Death of a Salesman and Yasha in The Cherry Orchard. Other credits include productions at the Shaw Festival, Theatre Aquarius, the Manitoba Theatre Centre, the National Arts Centre, Tarragon Theatre, Theatre Calgary, Theatr Clwyd in

Wales and the Grand Theatre in London’s West End.

Do You Turn Somersaults? is Set and Costume Designer Joanne Yu’s TIFT debut. Most recently, she has worked on Kingfisher Days (The Grand), Romeo and Juliet (Shakespeare in Action) and Oedipus Rex (Classical Theatre Project).

Gareth Crew has worked as the Lighting Designer numerous TIFT productions, including Dani Girl, Assassins and The Tale of Ivan vs. Ivan. He was recently nominated for a Dora Mavor Moore Award for his work on Madhouse Variations (Eldritch Theatre).

The production will preview on Thursday, November 17 and open November 20 and run to Saturday, November 26, at the Mady Centre for the Performance Arts, 1 Dunlop St. West in Barrie, N.