Toronto, November, 2011 – Canadian Stage, in co-production with the Vancouver Playhouse Theatre Company and The Citadel Theatre, present the Canadian premiere of the Tony Award-winning play, Red. 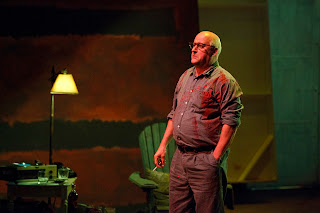 This stark and passionate production explores the life and work of celebrated Abstract Expressionist painter Mark Rothko as he struggles to create a masterpiece in the face of fame, fortune and commercialism.

Red will be on stage in Toronto from November 19 to December 17, 2011 (Opening Night: November 24) at the Bluma Appel Theatre in the St. Lawrence Centre for the Arts (27 Front St. E). Tickets from $22 to $99 are available online at www.canadianstage.com, by phone at 416.368.3110 or in person at the box office. After opening in Toronto, the production will travel to the Vancouver Playhouse from January 14 to February 4, 2012 and The Citadel Theatre in Edmonton from February 11 to March 4, 2012.

Written by Academy Award-nominated screenwriter and playwright John Logan (Gladiator, The Aviator) and directed by Siminovitch Prize-winning director Kim Collier (Studies in Motion), Red introduces audiences to the compelling artist Mark Rothko and his young assistant, Ken. Set in his studio in the late 1950s, the play is a fictionalized account of one of Rothko’s historic artistic commissions: to create a series of murals for the new Four Seasons restaurant in the Seagram Building in New York City. As he paints, Rothko begins to question the project he’s committed to and his role as an artist. When he sees that his great commission will reduce his paintings to being merely decorative rather than transformative, he confronts this new truth through a visceral and passionate debate of ideas, art and relevance. 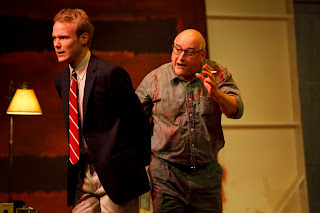 "Red is a deeply moving, engaging and intelligent play,” said Canadian Stage Artistic & General Director, Matthew Jocelyn. “Director Kim Collier has assembled an awe-inspiring team of artists who give this poignant script new life in a contemporary and truly Canadian production that we are thrilled to premiere with our artistic partners across the country.”

One of Canada’s leading stage actors and Shaw Festival veteran Jim Mezon (Cat on a Hot Tin Roof, Copenhagen) plays the role of Mark Rothko with up-and-coming actor David Coomber (Bullet for Adolf, Post Eden) portraying his assistant (and aspiring painter) Ken. This pairing between an experienced actor and an emerging performer echoes the master-apprentice relationship between their respective characters and brings an added layer of depth to the performance.

Grounded in months of comprehensive research, the creative team has built a stage and set that theatrically mirrors Rothko’s 1950s working conditions. Former Barenaked Ladies musician Andy Creeggan composes an original score inspired by the music Rothko listened to while painting. David Boechler’s set and costume design evokes Rothko’s historic New York studio space and Alan Brodie’s lighting reflects the particular light in which Rothko worked and displayed his pieces. A series of accurate reproductions of Rothko’s infamous “Seagram Murals” (the paintings he and Ken work on throughout the play) were painted by scenic artists at Hamilton Scenic Speciality Inc., and actors Mezon and Coomber became familiar with Rothko’s technique through painting rehearsals and information sessions with artists. Finally, video projections based on the artistic movements of the period by cinematographer Brian Johnson give a framework to the conversations happening on stage.

“I have been thoroughly intrigued by this period of art history and Rothko’s role within it,” says director and Canadian Stage Associate Artist Kim Collier. “I love that, as a play, Red captures Rothko’s ideas, struggles and debates in a smart, satisfying way we can all relate to.”

To build buzz and awareness about the production, Canadian Stage has partnered with Zulu Alpha Kilo, an award-winning advertising agency based in Toronto, to create an innovative and interactive experience promoting the Canadian premiere of Red called “The Mark Rothko Experience” at ExperienceRed.ca. The

interactive website allows visitors to join Rothko in his studio, playing the role of his assistant through a webcam. Users will experience the intensity of working with the temperamental and talented artist firsthand through a series of video scenes and interactions performed by Jim Mezon as Rothko.

In early November, thousands of paintbrushes dipped in red paint and tagged with the ExperienceRed.ca URL will be dropped by a guerilla street team around Toronto. The paintbrushes will drive traffic to the online experience and the Canadian Stage website for more details about the production and to buy tickets.

Today, Mark Rothko’s pieces have sold for as much as $72.8 million each and are featured in museums and personal collections around the world. Recently, his work was seen in Toronto as part of the Art Gallery of Ontario’s popular AbEx exhibit and one of his paintings was featured on an episode of the popular television show Mad Men.

Canadian Stage presents Red at the Bluma Appel Theatre in the St. Lawrence Centre for the Arts (27 Front Street East). Performances run Monday through Saturday at 8 p.m. with matinees on Wednesday at 1:30 p.m. and Saturday at 2 p.m.

• Tickets from $22 to $99 are available online, by phone at 416.368.3110 or in person at the box office. Discount tickets are available through the Sun Life Financial Arts Accessibility Program. For details visit www.canadianstage.com.