TORONTO - Cyclone, a musical which was the hit of the SummerWorks festival in 2010 and is returning to Toronto this November. Toronto is the final stop on a tour that included Victoria, Vancouver, and 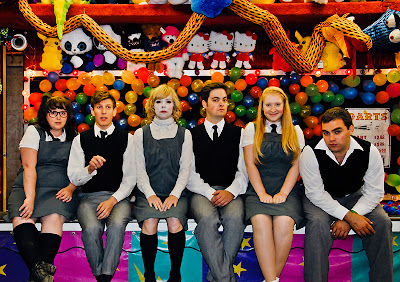 Whitehorse, with wildly positive reviews (the Vancouver Sun called it "a work of genius that defies description"; the Georgia Straight called it "theatrically dazzling") and sold-out crowds greeting the show in each city.

It’s a comedy, a tragedy, and a musical ride, as a teenage chamber choir from Uranium, Saskatchewan die in a roller coaster accident at a traveling fair. Karnack, a mechanized fortune-telling machine, feels responsible for the young choir’s demise, and gives the teens a chance to express themselves to the world after death. Ride the Cyclone is their final recital, where they celebrate their individuality while coming to terms with their untimely demise.