Canadian Stage celebrates 30th anniversary of Shakespeare in High Park with A Midsummer Night’s Dream directed by Richard Rose in Summer 2012
June 26 to September 2, 2012 at the High Park Amphitheatre

Toronto, ON – Canadian Stage will mark the 30th anniversary of Toronto’s much-loved outdoor theatre tradition with a production of William Shakespeare’s A Midsummer Night’s Dream directed by award- 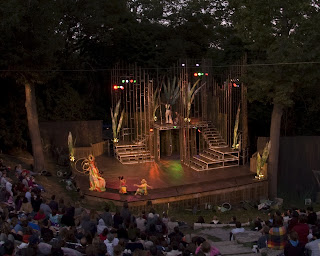 winning director Richard Rose. This year the summer-long event will be called Shakespeare in High Park, marking a rebranding of the popular pay-what-you-can family friendly event.

With seven previous productions of A Midsummer Night’s Dream (including a 25th anniversary production) presented by Canadian Stage at the High Park Amphitheatre, it has been most popular and most produced of Shakespeare’s plays for the company.

“A Midsummer Night’s Dream is the perfect production with which to celebrate 30 years of sharing Shakespeare under the stars here in Toronto,” said Canadian Stage Artistic & General Director, Matthew Jocelyn. “As a director Richard Rose has a remarkably creative and contemporary voice. He is one of the country’s most respected artists and we are thrilled to have him at the helm of Shakespeare in High Park.”

Richard Rose, the recent recipient of the Walter Carsen Prize for Excellence in the Performing Arts and the current Artistic Director of the acclaimed Tarragon Theatre, returns to Canadian Stage after more than 10 years to bring A Midsummer Night’s Dream to life. Prior to joining Tarragon Theatre, Rose was the Founding Artistic Director of Necessary Angel Theatre Company and has worked with the Stratford Theatre Festival for 10 seasons.    Selected credits with Canadian Stage include Arcadia, Transit of Venus and more. Casting details and further information about the production will be shared in early 2012.

A Midsummer Night’s Dream follows the adventures of four enchanted lovers and a group of amateur actors as they make their way through a moonlit forest inhabited by mischievous fairies. Canadian Stage will present Shakespeare in High Park: A Midsummer Night’s Dream from June 26 to September 2, 2012 at the High Park Amphitheatre. In keeping with annual tradition, admission will be pay-what-you-can and Canadian Stage will offer a series of free, all-ages and family-friendly activities and events. One of Toronto’s favourite summer traditions for 30 years, Shakespeare in High Park is the oldest annual outdoor theatre event in the country with an estimated total attendance of 1.3 million people.

About Canadian Stage:
Founded in 1987, Canadian Stage is one of the country’s leading not-for-profit contemporary theatre companies. Under the direction of Artistic & General Director, Matthew Jocelyn, the company presents multidisciplinary theatre with a focus on emerging performance styles that integrate theatre with other artistic mediums such as dance, film, visual arts and more.