on December 12, 2011
From a media release - it's officially SOLD OUT but there will be a few tickets left at the door at show time for the lucky:

LIMITED TICKETS AVAILABLE AT THE DOOR AT SHOW TIME.

NEW YORK CITY - With his multi-Grammy-winning music career, continued work in film and television, and multiple written works, Common has emerged as one of Hollywood's most sought-after leading men. His numerous accomplishments in film and music include starring on the silver screen in films such as Smokin' 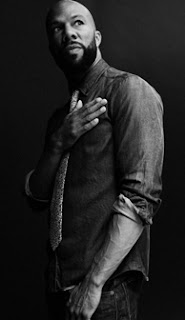 Aces (2006), American Gangster (2007), Wanted (2008), Date Night (2010), and Just Wright (2010). In 2004, he partnered with Chicago native and rap music megastar Kanye West to produce the album Be, which went on to garner four Grammy Award nominations. In 2007, he released his critically acclaimed seventh album Finding Forever, which debuted at No. 1 on the Billboard 200 Album Chart and went on to earn a Grammy Award. His eighth album, Universal Mind Control, was released in 2008 and was nominated for a Grammy in the Best Rap Album category.

Common is also a regularly requested guest speaker known for motivating and empowering collegiate minds while speaking at prestigious universities across the country. In 2000, he launched the Common Ground Foundation, whose mission is dedicated to the empowerment and development of disadvantaged youth in urban communities by mentoring in three areas: character development, creative expression, and healthy living. He's also the author of numerous books, including The Mirror and Me (2005), I Like You But I Love Me (2006), and his memoir One Day It'll All Make Sense, released earlier this year. Whether inspiring audiences through music, movies, television, books, or his foundation, Common continues to break new ground and remains one of hip-hop’s most innovative, positive voices.