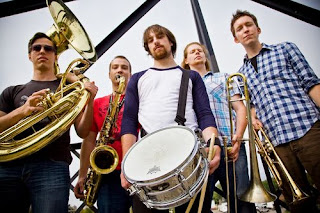 TORONTO - They charm the crowd of school age kids gathered in the lounge at Roy Thomson Hall before the main concert, playing and talking up their instruments and jazz in general. A crowd of the young admirers follows their impromptu New Orleans style parade around the room and after, a group of girls come up to them to tell them they love jazz just because of hearing them play.

The Heavyweights Brass Band has a musical and personable appeal that transcends generations and genres. I've seen them wow crowds that ranged from university kids to retirees with their fresh and energetic approach to the genre. There's an equal attention to musicianship and entertainment that results in their winning formula.

The band has been together about two years exactly and released their first CD - Don't Bring Me Down (2011) - earlier this year. Some of the members have a connection to Humber College and the now defunct Dark Park Brass Band. "I was playing classical tuba and looking for something more. I answered a craigslist ad," laughs Rob Teehan. What they shared is an entertaining approach to jazz and a democratic approach to assembling their repertoire, with each member bringing favourite songs and arrangements. "I was the one that 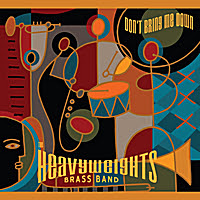 arranged Justin Bieber," Rob claims, pointing out the eclectic nature of their set lists. Along with jazz and classic funk, Heavyweights plays arrangements of current pop tunes. "It's all those tunes you can't really escape from," laughs Jon Challoner. "Bands in New Orleans play pop tunes all the time," Lowell Whitty points out. "Jazz was really born of popular music," adds Chris Butcher. "Quite often, modern jazz is removed from that."

They've certainly brought popular back and the appeal of their live show is undeniable. They all seem a little surprised that their audience should be so diverse; it's the combination of having the chops and the taste to put together a cool repertoire. It's about bringing jazz to a wider audience by bringing it back to the basics. "It's just to bring people great music," Jon says. It's infectious and danceable and if you're in Toronto there are a couple of dates coming up.