Club d'Elf's music has been called "Moroccan-dosed dub-trance-jazz", and draws upon electronica, Moroccan Gnawa music, dub, free jazz, hip-hop & funk to create a heady, danceable mix. The band convened for the first time in 1998, spearheaded and fronted by bassist/composer Mike Rivard, a busy 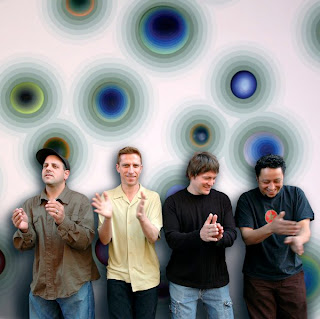 session player who has recorded & performed with Morphine, Jon Brion, Aimee Mann, G Love & Jonatha Brooke, amongst others. Rivard drew from the players in the myriad of bands he worked with to fill out the ranks of D'Elf, creating an incredibly diverse rotating cast. Formed around a core rhythm section with the addition of different special guests for each show, the idea was to remix Rivard's groove-based compositions differently for each performance. Guests over the years have included John Medeski & Billy Martin (MMW), DJ Logic, Marc Ribot, Skerik, and Marco Benevento (Benevento / Russo Duo), with jambands.com describing the situation thusly: "Club d'Elf consists of Mike Rivard and any cohorts who decide to embark with him into perilous sonic chimeras."

The band enjoys exploring mash-ups of the diverse musical universes they travel, where a Squarepusher-styled drum'n'bass groove may give way to a traditional North Indian tabla interlude, in turn dissolving into some Miles "Live Evil" type electric mayhem. Over the past few years (under the tutelage of member Brahim Fribgane, who hails from Casablanca) the band has been absorbing Moroccan trance influences and frequently adding this element to the live mix, showcasing Fribgane's mesmerizing oud stylings and Rivard's commanding playing of the Moroccan sintir, a 3 string bass lute used by the Gnawa people, a mystical Sufi brotherhood descended from sub-Saharan slaves brought to Morocco over 500 years ago.

Over the course of it's 13 year history the band has has held a residency at Cambridge's Lizard Lounge, and while visits out of the Northeast have been rare, D'Elf has found a large audience in Japan and toured there five times, most recently in December '10 w/ Medeski as special guest, where the band played to enthusiastic, sold-out rooms. A predominantly Muslim audience embraced the band's take on Moroccan folk music at the 2007 edition of the Festvial Du Monde de Arabe in Montreal, where they performed songs by beloved Moroccan band Nass El Ghiwane and Berber musician Haj Belaid. 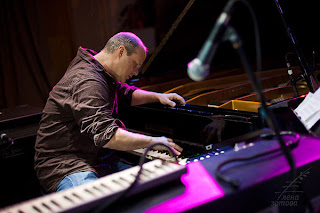 Finding it's true element to be live performance, where the band revels in musical tight-rope walking and improvisational daring-do, D'Elf has released 7 live double-CDs on the Kufala label. In 2006 D'Elf released it's first studio disc, Now I Understand, which climbed to 7 on the CMJ Jazz chart and garnered rave reviews. On April 5, 2011 the band's long-awaited studio follow-up will hit the streets. A double-disc set, entitled Electric Moroccoland/So Below, it represents two distinct sides of the groups sound: Moroccan trance and funky electronica/DJ-driven beats, and features over 26 musicians including Medeski, DJ Logic, the late Mark Sandman of Morphine (in some of his last recorded performances), and Hassan Hakmoun singing a Gnawa-ified version of Cream's "Sunshine Of Your Love". The band will tour the Northeast w/ special guest John Medeski in April to promote the album.

John Medeski's mother taught him to read before he even started school, and his father taught him to play blues and jazz standards on the piano before he learned to walk. So it is only fitting that today John is completely dedicated to the piano, cross-pollinating diverse musical disciplines, and immersed in inventive musical conversation.