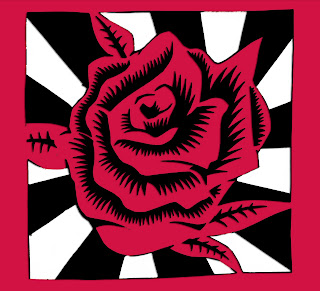 Serbian roots get everyone leaping, gyrating and causing a ruckus.

But don’t blame it on the Balkans: This crack quintet is all NYC. You might catch them wailing mid-span on the Brooklyn Bridge under a full moon. Or making partiers above Bushwick dance so hard that the roof bounces—literally. They’ve played passionate solos in Brighton Beach hot tubs, snaked through unsuspecting fashionistas on Staten Island, and gotten listeners in one upstate town so riled up, the police nearly intervened at a street gig one cold December day.

Dancing on Roses, Dancing on Cinders (self-release; January 10, 2012) bursts with this frenetic joie de vivre—and with the intense love for Balkan traditions and focus on musicianship that power the high-energy party. Digging into black-market compilations, Eastern European carnival traditions and their own eclectic musical pasts (out jazz, New Orleans brass, punk), Raya Brass Band has the chops to match their irrational exuberance.

Raya Brass Band, with its portable but powerful show, plays crazy gigs as a matter of course and can scramble and leap into any party breach. The beautiful mayhem runs side-by-side with a serious grounding in the music of Eastern Europe.

This includes a striking sense of the compound rhythms, odd meters and curlicue melodies of Northern Greece, one particularly strong source of inspiration for Raya’s players. Masquerade traditions and an early- 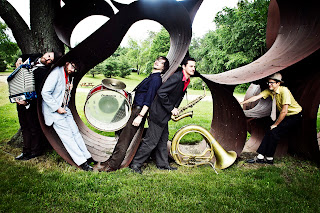 “This draws a lot of us to the music,” explains Raya’s reeds man Greg Squared. “The challenge of the meters. All over the Balkans, you get lots of dances and songs in seven or sometimes in nine. But in Greece, you get tunes in 9+7, in these amazing compound odd meters with certain beats that swing and stretch.” Which adds up to an intriguing time for musicians and dancers alike.

Beyond the musical intricacies, there’s a warm, welcoming social core to the music that Raya communicates. “When I was in Greece, I remember hearing this incredible music coming down street. It was a brass band, wandering through the village,” recalls accordion player Matthew Fass. “I was struck by the immediacy and the intimacy. That drew all of us to this. We don’t want to play on stage so much; we love to be out on the dance floor, to break down the walls between us and the audience.” This intimacy shines on traditional Greek tunes like “Endeka/Patinada” and on “Melochrino,” a santouri (Greek hammered dulcimer) number Fass took up a notch.

Devoted to the roots, Raya Brass Band unabashedly plays around with their favorite beats and forms. They turned Macedonian mystery synth blasts into funky, dubbed out dance tunes like “Cell Phone Song.” Named for the wacky ringtone Greg Squared crafted from an enigmatic track he found in Skopje on a black-market compilation, the track bounds through melodic curves and unexpected quarter tones—and still gets dancers waving their own phones in the air like lighters at a classic rock show.

And other influences—from avant-garde to down and dirty—sneak into Raya’s explorations. Witness “Tavernitsa,” an original tune by trumpet player Ben Syversen. “Most of the tune is fairly traditional sounding, but there is an interlude between the trumpet and sax solos that is more reminiscent of Julius Hemphill or Henry Threadgill than something that you would typically hear in a Balkan folk song,” Syversen reflects. “I always imagined watching folk dancers turn their heads and make faces during that part of the tune, all while 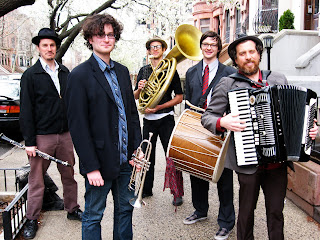 continuing to dance. In practice, I haven't seen too many shocked looks.” Only smiles, hoots, and flying feet.

“Nevestinsko Oro,” traditionally played during the bride’s first dance at Macedonian weddings, got a dancehall-inflected revamp, at Fass’s insistence. The straight-up Balkan brass arrangement just wasn’t grooving enough. “We had fun with that one,” laughs Fass. “After starting out with just the tupan [double-sided bass drum] and two other players, the band roars out with this big major chord. We get into the groove. People start singing, in anticipation of that big moment.”

Though complex and subtle as any out jazz, Balkan brass is ultimately celebratory music. At the same time, for musicians like Greg Squared and the band’s tuba player Don Godwin, it harnesses the raw, bold power of the wild music they grew up with. It’s got punk oomph, but deeply joyful roots.

“That’s the beauty of the music,” Greg reflects. “You can’t really make a half-statement. It doesn’t work. You have to say, ‘This is how I feel and this is what I think right now.’ You say it in complicated ways, but there’s this amazing, direct sense of presence in the music and the playing.” This presence, unamplified and unmediated, moving directly through the crowd, is what Raya Brass Band is all about.