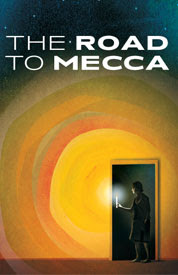 Acclaimed as “striking, compassionate and Fugard's most personal play” by The New York Times, The Road to Mecca tells the story of an eccentric elderly artist facing mounting pressure to abandon her independent life for a church retirement home. Out of desperation, she calls upon her only confidant, a fiery young teacher from Cape Town. When the village minister arrives to coax out her decision, the three enter a blazing showdown that pits conformity against free expression… faith in community against faith in oneself.

Set against the charged backdrop of South African apartheid, The Road to Mecca is a beautifully crafted tribute to the artist’s indomitable spirit. The Road to Mecca is inspired by the true life story of Helen Elizabeth Martins, the youngest of six children, born and raised in the small South African village of Nieu Bethesda in December 1897. Gordon Edelstein (Roundabout's The Glass Menagerie) directs.