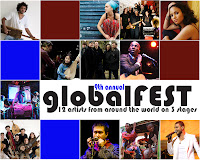 New York City - globalFEST was a sold out love in for 12 acts that brought diverse flavours of international musical innovation to the three rooms of Webster Hall on Sunday night. It was physicallyimpossible to take it all in, (and the masse of people made negotiating the three rooms on three floors no small challenge,) and I couldn't stay till the very end (more's the pity) but here is a sampling from my notes. With the festival's new touring fund, here's hoping these artists go on to play for wider audiences across the continent. 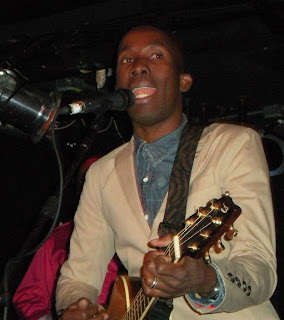 BélO
The Haitian artist and his band played original Caribbean flavoured music from two albums that ranged from polyrhythmic and fast paced to a reggae pulse and beyond, with strong, expressive vocals and a tight band that included keyboards, electric guitar, drum kit, bass, percussion and BélO himself on acoustic guitar. The set was varied and danceable - naturally! - with a warm crowd that packed the studio and sang along to the choruses. His music is infectious yet also sophisticated, and he has an assured and likeable stage presence with an obvious passion for his homeland that makes him a charismatic ambassador with a socially conscious message.

Wang Li
And now for something completely different... You could call Wang Li's music "Chinese trance" with a traditional flair. He plays the jaw harp, a traditional instrument also known as a kouxian.

Out of it, he coaxes a surprising range of sounds from lilting to throbbing to almost bluesy, at times reminiscent of a harmonica. The crowd was a little chatty to begin with but settled in very quickly, entranced

by the hypnotic nature of the improvised music. It's hard to captivate a North American audience with a one man show and non-melodic, non-Western tonality, but along with the rest of the packed room, I truly found myself mesmerized by his intense performance. Between songs, he charmed with a wry wit, and he also plays a kind of flute and what looked like a brass bowl of water (!) Currently unrepresented in the U.S. (part of globalFEST is about the business of getting exposure and hopefully future North American gigs for the artists involved) and I hope that changes soon. His music is fascinating.

(The video - much better than my attempt - shows the technique in a different performance.)

Yemen Blues
I've seen Yemen Blues live before but couldn't resist slipping upstairs to the Ballroom to check out the tail end of their set. Ravid Kahalani is a unique talent, an emotional singer and ecstatic kind of dancer with a riveting stage presence, backed up by the large band that includes oud, trombone, flute and violin, among others. The music is equally unique, a combination of his Yemeni Jewish heritage with a splash of West 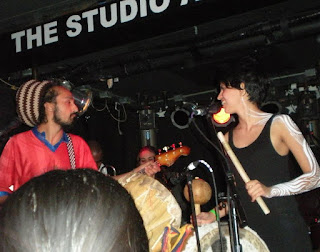 African exuberance and bluesy grooves that had the audience dancing along.

M.A.K.U. Sound System
Here's Colombian culture on steroids, an ultra high energy outfit from Queens that burned up the stage before an appreciative crowd. The band features eight members, including keyboards, drumkit, sax/clarinet, trombone, bass, lead guitar and no less than two percussionists, one also being a lead singer. The music was insistent and came at a frenetic pace, danceable Latin rhythms with a little worker politics thrown into the mix and ranged from melodic to psychadelic, with so much going on, on stage that I literally couldn't take my eyes off them. All were talented, with guitarist Camilo Rodriguez of special note. (Pictured are Lana Conde (vocals, percussion) & Jamila Weaver (bass) - behind them Lety ElNagar (clarinet & tenor sax) & Robert Stringer (Trombone))

Debo
I only caught the very first couple of tunes from this Boston based unit that celebrates the classic, driving funk of Ethiopian music from the Golden Age of the 1970's, but saw and heard enough to know that this diverse group gets the grooves just right - saxy and hypnotic.