INDIECAN’s first release, Moon Point, directed by Sean Cisterna, opened this past weekend at AMC Y&D, to cheering fans, who helped make it one of the top 6 highest grossing films, out of 19, at the popular theatre venue. All to say, that Moon Point has now been brought back for a second week (to February 16). 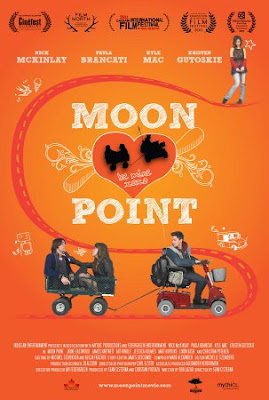 I'm most often suspicious of films or books that are billed as 'quirky' - too often taken as a synonym for forced and superficial cool than any real sense of the whimsical, but Moon Point is an engaging film that actually lives up to its PR. It follows Darryl and friends in a kind of oddball road movie - slash - romcon - slash - coming of age story.

Femur is Darryl's wheelchair bound, engineering genius friend. He's devised a souped-up electric wheelchair just as Darryl comes to him with his plan to travel to Moon Point, a nearby town where Sarah Cherry, a hometown girl made good - and Darryl's grade school crush - is shooting a vampirish movie. Since neither has a driver's license, the wheelchair and its attached cart become their ticket to ride. Shortly after they set out down a gravel country road, they hook up with Kristin, a young lady on the run from her boyfriend and her past.

The premise is on the absurd side, and the opening scenes a bit clunky as they establish Darryl as the family's underachieving loser, stuck in his mother's house without gainful employment - or prospects - at 23, but big on philosophy, politics and other rationalizations. But just when you think the movie will sink 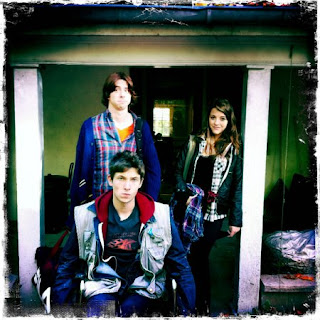 into predictable mediocrity, it rises above it with a real and genuine sense of the unusual peopled with a host of eccentric characters (like Art Hindle in a banana suit) and unexpected moments like the creepy guy who stops to pick up Kristin roadside, "Can I see your feet?" he asks.

Flashbacks take us back to Darryl and Sarah Cherry as adorable preteen moppets, he earnest and in love, she as a precociously worldly child actress. There are funny scenes and the emotional points ring true too. In the present of the story, the three road warriors bond as they face a series of surreal adventures, but then break apart again just when I was expecting a Hollywood finish. The film's not afraid to show Darryl's flaws and weasely side while still making him sympathetic. It's sentimental without being syrupy or using unrealistic film clichés to save the day. I liked its understated charm and yes, it's quirkiness.

Moon Point is the first film to be distributed by INDIECAN ENTERTAINMENT, a new distribution company introduced in November by veteran film producer Avi Federgreen.