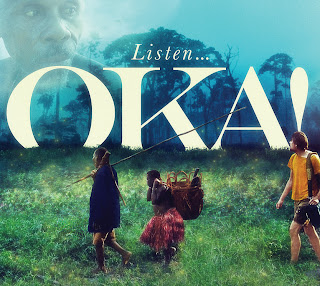 Beats fly from drums made of the living roots of towering trees, or from the surface of flowing water. Songs, born of highly complex structures, spring from multi-part improvisation. Rhythmic cycles extend to lengths that baffle outsiders’ ears. Music both expresses and creates the moment, with spontaneous compositions leaping out in joy, or contemplative flute melodies drifting through the late night village to encourage dreams and peace.

This is the music of the Bayaka (Pymgies) and the Oka! Soundtrack (Oka Productions; release: February 1, 2012). Directed by Lavinia Currier (Passion in the Desert) and starring Kris Marshall (Love, Actually), the film tells the story of ethnomusicologist Louis Sarno, a leading expert on Bayaka music who ignored a life-threatening disease to live for three decades among these forest hunter-gatherers and record their music. Filmed and recorded on location in the remote tropical forests of the Central African Republic, Oka!’s story, the film, and the soundtrack were intimately shaped by Bayaka artists.

Going far beyond previous recorded encounters with this unique music, musician and engineer Chris Berry used multitracking techniques generally left in the studio and brought them to the Bayaka’s home turf. He worked with the community to write songs and to harness the sonic qualities of everything from earth bows to midnight flutes, from resonant roots to cupped palms on water. The result is a crisp, lush perspective that captures the full glory of the Bayaka egalitarian spirit and endless musical creativity.

“You just can’t frame it like Western music,” Berry explains. “It’s very complex, and make no mistake: Bayaka musicians know exactly what they are doing. And the most ingenious thing about it is that while they stick to this order, everyone is free. They express that moment and get at the power and beauty of 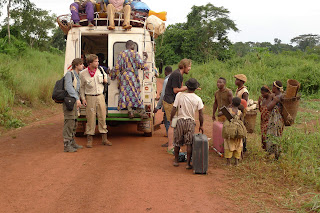 where you are, right there.”

In just such a moment, Essandje, a highly respected woman in the community, leaped into overdubs. At first, the Bayaka singers weren’t quite sure why they had to follow Berry’s suggestion, put on headphones, and sing over their previously recorded tracks in the thatched shelter Berry used as his base.

But Essandje got it (Her nimble, rich voice rings out on “Mua” and “Wild Yam”). And within days, so did everyone else, with her guidance. “When Essandje broke the barrier, that’s when the magic started happening,” Berry recalls with a smile. “After a few days, the women came to me and said, ‘We want to write songs, and we want do to it with you.’”

“The women are the stars of Bayaka music, “Berry says, “When the women start to sing, the men shut up.” Many Bayaka songs come to them in dreams. Etoo (“Yetoo’s Dream”) asked Chris to record the songs she had dreamed in the forest. “‘One day,’ she said, ‘I dreamed a song. When I woke up singing it, my husband was singing the same song,’” Oka! director Lavinia Currier recalls.

Berry’s recording rig was designed to make breaking barriers easy. He had honed it as part of a collaborative effort with globally minded composer Paul Winter, who had invited Berry to join in on a project chronicling the music found along birds’ migration routes. Berry, an American-born multi-instrumentalist who spent more than a decade in Zimbabwe studying the mbira (thumb piano), had recorded thousands of hours of African music, multitracking in the field instead of simply hanging a mic or two over musicians or grabbing a few catchy samples.

Bayaka sounds presented a particularly fascinating challenge: “A lot of the other African music I recorded had lots of rules and stable, regulated roles for the musicians and parts,” Berry explains. “But with the Bayaka, everyone gets to improvise if they stay within certain loose parameters. The music reflects their society, because no one is leader and no one is follower. They all play together, with four or more intermingling songlines. It’s like trying to record Mingus, Coltrane, Miles, and Dizzy, all soloing at the same time, yet all playing together perfectly” on tracks like the bawdy, intricate “Bottlefunk Girls.” 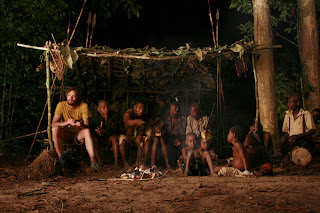 This complexity and freedom first gripped Sarno as he headed into the forest, and astounded Berry as he worked and played music with the Bayaka. Compositions feature rhythmic cycles that feel extremely long by Western standards: “We have a 12-bar blues,” Berry notes. “Just imagine a 54-bar blues, or a 67-bar blues, and you’re getting close to the Bayaka.”

Music is a constant activity, but not really a subject of intellectual discussion for the Bayaka. For the Bayaka, a person’s personality is expressed in song and dance. Berry had to spend time with them, dancing and singing (two concepts expressed by a single word, “eboka ” in Bayaka language), improvising and listening. In addition to striking songs, he heard an elder playing flute as he strolled past sleepers late at night (“Mboyo Flute”) and the subtle resonance of the earth bow (“Molimo”). “The earth bow may be the oldest instrument on earth,” explains film director Currier, who like Berry, worked intensively with the Bayaka musicians. “A length of twine is stretched from a bent sapling and anchored in the ground where there is a hollow resonance, then plucked like a double bass.”

Jubilant Bayakas returning from trading at a nearby village played the tree drum, a living forest trees whose roots boom below ground (“Tree Drum and Gano”). “The Gano is a storytelling song, related to the Bantu “Griot” tradition, and, distantly, to American blues,” Currier notes. “Many Gano songs tell of the Bayaka’s ancestors, when people were related to and spoke to the animals, to chimpanzees and gorillas.”

As he worked closely with the Bayaka, Berry was allowed to record a purely female activity, waterdrumming, when Bayaka women cup their palms to create bubbles of air that can be tuned and 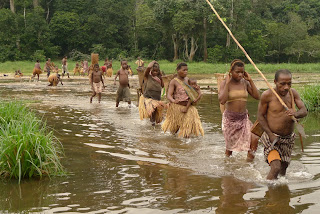 played with a marimba-like resonance (“Waterdrum”). The women performers, who usually make this music while bathing, agreed to dive in clothed while Berry risked several mics to capture the full, splashing effect.

Yet Berry also wanted to pass along more than just the sounds of his newfound collaborators; he wanted listeners and film viewers to get closer to the visceral experience of being there with musicmaking Bayaka. Berry thoughtfully added bass lines, percussion, and additional frequencies so that the recording would transmit the full feel of the performances, from the rumble of roots to the quiet bounce of the earth bow. He also knew he was creating sound to go with the film’s narrative of intense emotional journey and cross-cultural encounter.

“Making a soundtrack with musicians like the Bayaka is a translation process. If you don’t translate it, many listeners won’t get it. Yet most projects get over-translated,” Berry muses. “It’s easy to misunderstand music that’s so complex, that comes from a very different kind of community from our own. I hope this scoring approach becomes more of a trend when we’re dealing with other cultures; there’s a lot of mutual learning and growth to be had if we let others speak. If we let their voices come through.”