The Spirit of the Drum: West African Drums & Dance January 20 in Toronto 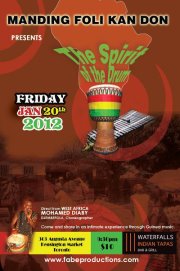 TORONTO -  Enjoy an intimate evening of West African drums and dance with Mohamed Diaby and Manding Foli Kan Don. Come out and enjoy the sounds of Guinea.

Mohamed Diaby began playing the djembe at age seven, under the supervision of his elder brother Moustapha. By fifteen, Mohamed joined