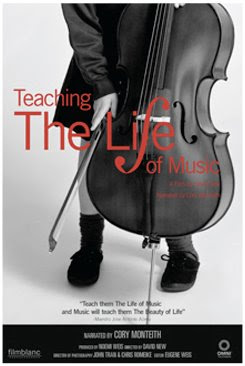 "It makes me happy to play violin."

The simple admission by a young musician is an idea echoed and amplified throughout this uplifting documentary about El Sistema and the organizations it has inspired throughout the world. Like the children itprofiles, Teaching the Life of Music is so unabashedly good hearted and joyful it would melt the most cynical of postmodern hearts.

Founded 36 years ago by Maestro José Antonio Abreu, El Sistema began with a vision of bringing free musical education to the children who live in the vast slums of his native Venezuela. The program now brings that same promise to some 300,000 children in that country, and extends its influence with organizations based on its principles that now extend across the globe. One of their most famous graduates is Gustavo Dudamel, the celebrated young musical director of the L.A. Philharmonic Orchestra. The film includes footage of a visit to Toronto from El Sistema's crown jewel, the http://www.simonbolivarorchestra.com/Orquesta Sinfónica Simón Bolívar (Simón Bolívar Symphony Orchestra) comprised entirely of its students.

"Music becomes a tool that serves man and society and the development of communities," says Dr. Abreu. The program is free and the instruments donated. Learning, playing and performing together builds a sense of teamwork, hope and of working together towards common goals, towards a future. It overcomes the exclusionary nature of poverty. Music is a social art, and El Sistema looks at music as the key to social change. "Music begins to extend its magnificent influence to all of society."

A conversation with Glee's Cory Monteith, the film's narrator:

One of the global off shoots of El Sistema is Ottawa's the Leading Note, a music store whose owners were looking to get involved with local youth. Inspired by hearing the Simón Bolívar Symphony Orchestra on the radio, they began to think about how to adapt El Sistema's principles to 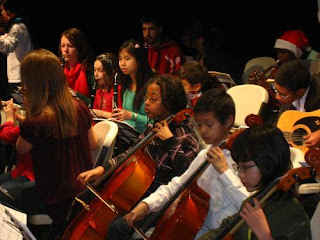 local realities. The program they have been offering since 2007 runs out of a community centre close to inner city schools, and focuses on new Canadians. The music becomes a true universal language that transcends linguistic and cultural differences - some of them quite vast. It offers a community beyond language and economics.

The Simón Bolívar Symphony Orchestra comprises some 250 of the most energetic and passionate musicians you'll ever hear or see, and the strongest material in the film comes from its members along with their Canadian counterparts; the voices of the kids themselves as they talk about their love of music and the family of musicians, of the unifying nature of playing together that completely transcends class and race. "That is the message and that is what makes you become a better human being," says one young clarinet player matter of factly.

Maestro José Antonio Abreu received a Glenn Gould Award during the 2009 visit by the Orchestra and the film follows the group as they play at schools and community centres around town, leading up to a concert before 14,000 school children at the Roger's Centre. Tellingly, the orchestra's talented and disciplined players are as excited about playing for them as the audience is to see them; the level of devotion and 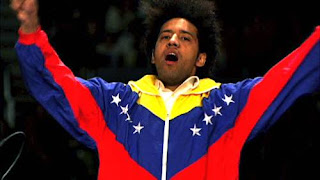 passion for the music is incredibly inspiring.

In a larger sense, the film and the stunning success of El Sistema also underscore the powerful returns that come from an investment in children.

Teaching the Life of Music is a one hour television documentary,produced by Filmblanc with the participation of OMNI Television's Independent Producer's Initiative fund, a division of Rogers Communications.

SPECIAL THANKS
Teaching the Life of Music is a labour of love that could not have been completed without the support of El Sistema, the Glenn Gould Foundation, The Leading Note Foundation in Ottawa, the Toronto and Ottawa School Boards, Jack Lenz and Lenz Entertainment, and individuals from the Canadian music community.